Rookie Carlos Huertas took a shock win to lead home a Colombian 1-2-3 in the first race at a timed very wet, then drying Houston. Season best results for runner up Juan Pablo Montoya and in third, Carlos Munoz. The end of the race was marred by a last minute incident as Graham Rahal spun out Tony Kanaan warming his tyres, but should not detract from Huertas maiden victory in Indycar.

Your thoughts on blue flags, and their effective nature within indycar, should the car being lapped just pull over or be allowed to fight to stay in contention? 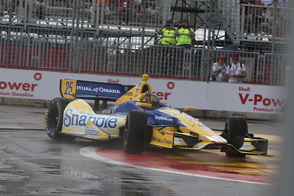 Andretti was penalised for holding up Sato (C.Jones)
TF - Blue flags should be advisory up until one lap down, if a car is running multiple laps down , I reckon then its time to give way.

CD - If you are on a road course and you're holding up the leader, you should be made to yield and let the leaders' through - if you've already lost that much time to be going down a lap, you have no business trying to fight with them. Fighting to stay on the lead lap is something that should be limited to the ovals.

AF - If they are slowing the leaders down they should be required to let them by but if they running competitive laps than they can fight to stay in contention.

ND - You should be able to fight within reason. When your attempt to stay on the lead lap is holding up a leader, than you should allow the leader to pass. A lapped car should never determine the outcome of a race or ruin that of a competitive driver.

AR - Im kind of split, if the car behind is fast enough then they should be able to over take the slower car, but remaining on the lead lap, being so important to keep in the race in AOWR, I can understand the need / desire to fight to stay ahead, very much agree with Tom's thoughts that you are advised that the leader is approaching, don't do anything stupid (bring the car home attitude), but if you are more than a lap down, you have to pull over and let the cars through

NG - Normally I prefer for there to not be any blue flags, especially in IndyCar with frequent cautions and the importance of staying on the lead lap. However in this case I could see where Race Control was coming from. Yes it is a team sport but Andretti weren't being very sporting; I don't like to see gamesmanship of that sort and I can only forgive it in the context of a championship battle. Marco ignoring the blue flags was proof enough of what was going on, he was fast enough not to be passed but conveniently slower than his team-mate and slow in all the "right" places. In the end I'm happy that IndyCar let it play out for a few laps first before it became obvious what was going on.

OH - Blue flags are there for a reason, Marco should have moved over a lot sooner than he did.

MC - This isn't F1 The lapped car(s) in Indycar generally have the same pace potentially as the leaders so they have the right to fight for their lap. I think there has to be some common sense element to this however. Marco for long periods was faster than Sato but his pace was dropping off and should have moved aside. As for Mikiel He was flying through and was looking likely to be able to get his lap back. Sato moved across but Aleshin should have been more careful and taken his time.


CR - Should be used more for backmarkers and lapped cars. Black flag if ignored after 3 laps.
Share your thoughts on the driving skills shown during the wet first half of the race, brave, bold, maybe slightly risky? 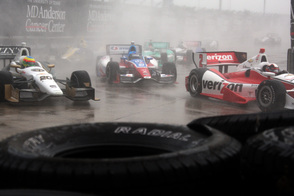 A very wet Houston added some drama (R.Dowdy)
TF - I enjoyed it, Good to see Indycar go out , racing in the rain, quite a novelty to see race series putting on a show in the rain these days. Sure it was abit ballsy at times, particularly off the line but it made for some great racing and that's what we want.

CD - The moves made during the wet part of the race were calculated well, and generally well executed, and proved for some great racing. Taku in particular used his wet-weather experience to make some bold moves to get to the front. Taku knew there's no better way to make hay than when the sun is shining! Wait a minute...

JC - Very brave! I think the spray from cars ahead and helmets fogging up had to be very scary!

ND - Sato was brave, bold and risky... but that is him rain or shine. The racing was great. I imagine that slower speeds and the desire to get the washout spray out of your face requires you to take additional chances. Regardless, rain races often leads to high drama and today was no exception.

AR - I thought this tweet sums up the answer to this question nicely, drivers were fast, aggressive, mostly sensible and fun to watch, especially in Sato's case! The switch to dry tyres was certainly an early risk which caught a few out, but being brave is what is needed at times.

NG - Anyone who complains that it all looks too easy isn't paying attention to the onboards in the dry; the wet weather gave a great visual representation of how skilled thrse drivers are. The standing start in particular was impressive. In fact when it dried out the driving standards seemed to be worse!

OH - I was actually surprised that they got so far in before the first yellow.

MC - I loved it, everyone showed their skill and why they are considered among the best in the world. I think it was even braver when they went to slicks given there were still huge pools of water of the track. Hats off to all of them for driving smart and brave in the first half.

Final 'restart' your thoughts - surging, brake checking, or just a cock up? 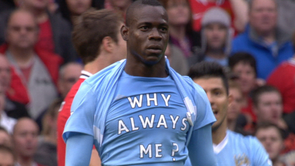 Mario Rahal? (BBC)
TF - Cock up, rather unhappy right now about it, least he went up and apologised though, respect for that. Not sure many drivers would of that soon after the race, shame both guys on for good much needed points hauls.

CD - Rahal goofed, plain and simple. That said, the series also cocked up with 2 to go by not having sent out a marshal to clear the debris from Turn 9.

JC - Bad timing to surge forward. Out of sync. I don't think it ever went green did it?

AF - I think Huertas would have won, Rahal would have taken 2nd ,and Montoya in 3rd. We will all always wonder what would have happened if Graham Rahal did not hit Tony Kanaan.

ND - Graham was trying to get heat in his tires. He punched the gas to get heat, check his grip for the restart and make sure that he was not going to get left on the restart. In doing so, he completely failed at the expense of a fan favorite. He took the blame. Just another sorry chapter in his tough year.

AR - To me it was a racing incident due to the nature of adrenaline running know full well Rahal had a chance to win, but it is something he should have anticipated with the motions of the other cars and also seven years Indycar racing experience, felt very bad for Kanaan though, drove brilliantly all race to get up to third starting way back in the pack.

NG - I would have been inclined to give Rahal the benefit of doubt if it weren't for the fact that he's already done the same thing this season (Long Beach). Both cars needed that result and he ballsed it up.

OH - kind of all three really, it's up to the leader to control the pace I think Rahal just got caught out. They need to sort out how a race finishes though, I realise it was a timed race but they should have finished under green even if it meant going a couple of minutes over time.

MC - Just a cock up to be fair. Rahal didn't do it on purpose but the way drivers ebb and flow before a restart this is always a danger. Kanaan has a right to be angry but Rahal has admitted full responsibility and apologised so think that should be the end of it.

CR - Just looked like a cock up to me. Shit happens sometimes. 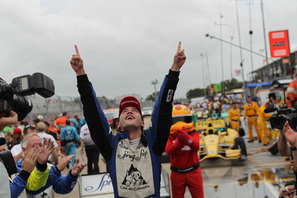 Rookie winner Carlos Heurtas (J.Sibinski)
Solid, fast when the track started to dry out, kept his nose clean and took a maiden victory, more impressive performances to come from the young ever improving Columbian.

"It was a really long race and I really struggled on the wet.  I had no pace, so I decided to stay very calm, and normally I'm calm but today I had to stay more calm because people were passing me, and I just didn't have any grip.  Then when it started drying up, I thought maybe we had a chance, and then I kept asking how many laps to the end of the race because I thought we could make it on the fuel. Funny enough, before the race on the strategy meeting, I asked the team if it was possible to do the race with just one stop, and they started laughing, and they said, if you have a pace of 80 seconds, then for sure, but I wouldn't recommend it. But yeah, it was a great day.  I was worried when Justin wasn't pitting because I think he was trying to make it to the end, but then they realized they couldn't make it.  I'm very happy I won.  In every series I've won at least once, so it's great.  And winning in a professional series like this one is incredible."

The thoughts of our Contributors

TF - When he appeared in St Pete after a couple of years in Europe with one win, I won't lie, my hopes weren't high but he's shown promise at Long Beach and Detroit on those road courses, as the seasons progressed. Although he wouldn't of been top of my list for a winner today before the race, he drove great today and fully deserves that win.

AF - Never expected him to win.

OH - Winning his first race even though it was under a yellow, he was in the right place at the right time to win it.

Entertaining race with some skilled driving and strong moves aided in the first half by the wet weather, mixed in with a few Indycar moments in the mix.