Fuel, pit stops, reds, black, two stops or three all factors which made for an entertaining race one of the Dual in Detroit. Will power won ahead of a hard charging Graham Rahal, and third was Tony Kanaan, with both runner up and third place both taking their best result of the season so far. 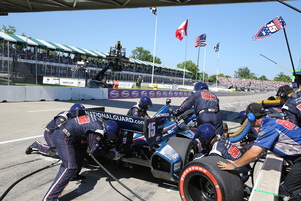 Rahal onto Reds (C.Jones)
With so many twists & turns even many of the drivers & teams didn't know what their strategies were out there. What are your thoughts on how the race/strategies panned out?

MJ -  The race was exciting. Perhaps all the yellows made it some what of a lottery but all in all a great spectacle.

KE - Really was down to who was on the right strategy at the right time. Helio was unlucky to finish so far down, but once again Will Power finishes a race at the front!

AR - The yellow flag game is always a hard one to win, particularly on street circuits where the opportunity to safely recover a stricken car is minimal without going to a full course yellow. It sometimes is like a roll of the dice. I always have great admiration for teams who do go for the risky option, as this provides extra intrigue into the race for fans.

AM - It was a surprise. When you watch F1 you already know the strategy or at least have an idea of what is coming. I think most of team underestimate the rough surface of Detroit.

MS - I'm not a fan of the pits closed when caution falls on road circuits as it totally transforms the order with people lucking into positions by having already pitted.

GC - An interesting mix of two and three stop strategies during the race. It was interesting that the top 4 cars were the three-stoppers, quite how much of this came down to strategy and how much was down to the way the caution flags fell is up for discussion.... but teams know a close-confined street course will more-often-than-not bite hard. Overall an enthralling race, with plenty of differing calls on strategies, ideal for the follow-on race from the 500.

NG - It was quite confusing really! I like fuel strategy races when they come about naturally, not so much teams just gambling and hoping it pays off. Maybe the pits need to be open during yellows again - if you are simply on a "save a stop" strategy then the yellow still helps you but it prevents lucky gains. 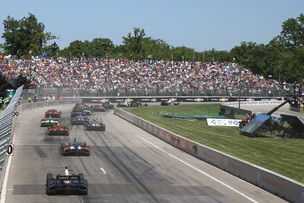 One move or two sir? (C.Jones)
Blocking was once again a major issue with several drivers receiving warnings or penalties. Do you feel the rules on this matter need changing? If so, how?

MJ - One move which has to decided early - done.

KE - When Power wasn't penalised at the end and Aleshin was earlier something needs to be looked at.

AR - My major gripe is the consistency, sometimes you see the slightest of moves punished whereas big moves are just warnings. I am all for letting them race, but to the guidelines that need to be clearer and better appreciated by the drivers.

AM - Although blocking is part of racing, what IndyCar does is remarkable but IndyCar should change some of it's points in the criteria. Example: Aleshin getting a penalty for blocking Sato with 4 laps down.

MS - Defensive driving is part of being a racing driver. It is not as bad as the days when drivers basically waved anyone through who had half a thought of making a move.

GC - I don't think the rule needs changing at all. It is pretty clear in wording and interpretation - blocking has to be proactive rather than reactive. There could, however, be some clarity and discussion around when there are groups of 3 or more cars together. If the middle car moves out, is he trying to pass the one in front or block the one behind?

NG - Again, it was a little confusing. Moving in the braking zone once the other driver has moved should be out of the question. Other than that, drivers should be able to defend. 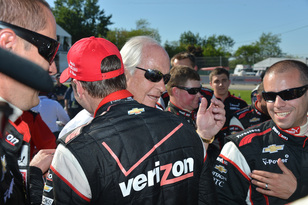 Power & Roger Penske embrace after victory (C.Owens)
Will Power came from 16th to win today & is looking strong in the points standings. Does he finally have what it takes to win the championship?

MJ - Whether Will has what it takes remains to be seen however Penske do a fantastic job of playing him I to races strategically.

KE - Let's see how the next couple go, especially Texas. If he can hook it up on an oval he has every chance of finally winning the championship.

AR - Something over the past twelve months has clicked for Power on the ovals, another win this weekend and I believe he is in the strongest position in his Indycar career. Will he do it though is another matter given the spread of talent over the field

AM - .Every season is the same. So I can't tell you if Will Power will win the championship.

MS - Will Power is usually the best on road/street courses but he does seem to get into a few controversial scrapes this last couple of years. He should have won it before now but this could be his year.

GC - As a Power fan I am hoping this is his year, after three agonisingly close years previously. Not favouring ovals, Will scored a respectable 8th at Indy, something that has previously been a weak point in his past challenges for the title. If Will can score consistently around the ovals and strongly on the road courses, this year could well be his for the taking... just as long as he backs off the aggressive defending/blocking moves a little.

NG - He's had what it takes eve since winning Fontana. He did well at Indy and if he can get another good result at Texas he'll be hard to stop. It does remain to be seen how he can do on the short ovals, but every driver has a weakness. 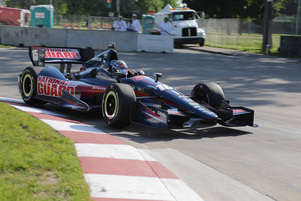 Graham Rahal (J.Skibinski)
Comfortably his best drive of the season saw Graham Rahal take second place. The car was quick and stratgies played out just right as he pushed Will Power hard for the race win.

"For us this entire National Guard team to get a result like this, you don't know what it means. We've been fighting awfully hard to just finish where we have been finishing and so to finally get a result like this it means more than words. As we look forward to tomorrow, I think we can do one better. I really do. And we've really learned a lot today and a lot that is going to help us tomorrow." (About the end of the race) "I was just trying to give him a run for his money. You know, I was just trying to get close enough where I could challenge him. We were pretty close. Didn't quite get there but I'm very proud of this team. The car was phenomenal. We're going to tweak it a little bit for tomorrow and we'll be better...I thought if I can just force him into a little mistake, this is mine. And that's all I was trying to do."

And the thoughts of our contributors...

KE - Finally getting the National Guard car to the front. Another couple of laps he'd have had the win. Will Power lucked out getting to the front, but Rahal looked like he deserved to be there.

AR - Best performance of the year, maybe a turning point for RLL Racing in 2014

AM - That 2nd place is breath of fresh air for him. Well deserved and great race for him since lap 1 watching his duel vs Andretti was like being in 1998 again.

MS - Tremendous improvement and the driver who looked most likely to make overtakes.

NG - The man was simply on a mission. RLL needed this result and Graham delivered.

For a track which was slated when it came back in 2012, the last four races have provided some exciting and intriguing races, this being no different!