A relatively incident free race, that only saw two caution periods (back to back) after the main talking point of the race being how Will Power's controlled the speed of the pack for a restart on lap 83. The race saw Takuma Sato take pole and held on to the lead until lap 31 when Power passed him going into turn 1, a lead which he did not relinquish until the chequered flag taking his 22nd career win and his second at St Petersburg. 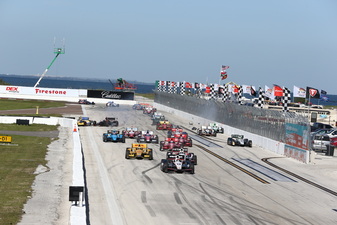 Will Powers leads the restart (photo: Chris Jones)
What was your take on the restart incident involving Will Power?

Thanks to Mac McCormick for the lead in with this opening question with his tweet! The general consensus for everyone that Will Power was responsible at some level for the incident.

Katelyn, ‘He was going very slowly..! However, IndyCar have a history of making half-arsed rules so if he was expecting the green flag between the cones then he did the right thing (they've often been told off for going too soon).’

Alonso, ‘this new rule is a bit confusing for some Drivers in my opinion from "When you see the green, go!" to "You must pass the cones and then go". Power abused of that rule I think.’

George, ‘many drivers towards the rear of the field have consistently been trying to gain an advantage by accelerating too early on restarts. That's part of the reason why restarts have often been messy in the Verizon Indycar Series; the drivers at the front would be travelling far slower than drivers at the rear and therefore there would be many cars wide going into the first corner. It is the `leader’s job to set the pace and no driver should be accelerating before the leader does. Hence I find Will Power innocent of all charges against him.’

Greig, ‘I do believe Will should have taken some form of penalty for the restart. Perhaps not as drastic as a black flag as some people are claiming, but certainly a drive through. Will openly admitted after the race to have lifted off the accelerator on the run up to the line. However, it is worth noting that there were two elements to the restarts - the green flag and the 'cone zone'. Nobody knows if there was a misunderstanding as to when acceleration can take place.

Martin, ‘there should have been a penalty. Safe restarts are the responsibility of the leader. Also single file restarts are a bad idea. Reduces the chances for overtakes and means restarts aren’t as exciting as they should be.’

Dan, ‘Will was lucky not to be penalised as he was still going slowly past the acceleration line, although the officials aren't blameless either. Single-file restarts may need reviewing too.’

Niko, ‘I think Will drove way too slowly before the restart. However there are some factors that mitigate his responsibility for what happened. The safety car kept going around the racing line instead of staying tight on the corner exit. Also, the cars that had an accident weren't the ones directly behind him, who you would think would be the most surprised by his pace but were the cars restarting further back. Typically this group of cars will go very slow on purpose so as to accelerate before the front-runners and get a run on them. Seeing as they were not in the designated acceleration zone you could argue it was a bit reckless from them, though how much at fault Marco Andretti and Jack Hawksworth were in particular I'm not sure as I haven't seen the replay enough times.’

Will Power had this to say after the race’ “They threw the green early, I thought we were meant to go in that zone. So that was – I was surprised. I don’t really know what happened behind me, what happened?” (When asked if he brake checked Helio): “I left it a little, I didn’t touch the brake at all. They can look at my data, I did not touch the brake.” 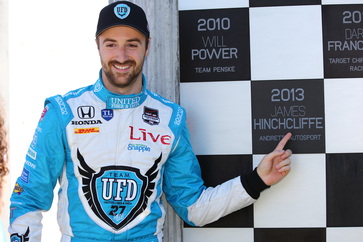 James Hinchliffe was unable to repeat is 2013 win (Photo: Chris Jones)
From form in pre-season testing to the chequered flag, who impressed, who disappointed?

Jack Hawksworth impressed a lot of people during this past weekend with his pace during practice and qualifying.

George, ‘Hawksworth really impressed, especially given limited experience of the DW12 and having only completed two days of testing with his BHA team. He had good pace until he retired from the race. Marco disappointed me the most. Sometimes I struggle to understand Marco Andretti. On some days I see a driver who is really driven and wants to win a championship, but on others struggles for pace and has the wrong attitude - he didn't seem bothered about being taken out of the race.

Greig, ‘Tony Kanaan had a solid start to his Ganassi career. Disappointments for me were last year's winner James Hinchcliffe, and Juan Pablo Montoya. Both had poor qualifying sessions and couldn't seem to improve during the race.

Dan, ’restart aside, Power. I've tipped him for the title this year. Sato looked strong, too. Hawksworth impressed, plenty to come from him. Conway unlucky with the penalty, could've been on the podium. Disappointed Munoz disappeared after early promise, Hinchcliffe had a race to forget, while Saavedra was, well, Saavedra.’

Niko, ‘aside from those who didn't have car issues there were no real disappointments. My nomination would be Mike Conway for Ed Carpenter Racing, purely because they ballsed up by not going into the pits when they should have. Whether it was a technical problem with the radio or just bad communication, I don't know. Conway could probably have acted on his own initiative and come in if he thought he hadn't got any message.’

Martin, ‘Impressed with all the rookies. Strong drives from Conway and Newgarden from the back too. I was really disappointed with Montoya who never got going. Hinchcliffe and Marco also lack serious pace.’

Montoya was also a disappointment for David and Katelyn, who does expect to see him finding his way soon. 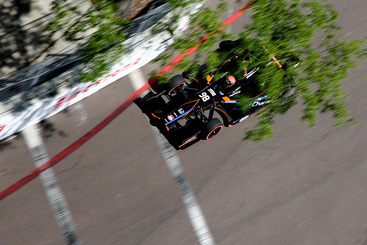 Rookie Jack Hawksworth impressed on and off track (Photo: Brett Kelley)
With four rookies in the field, whose performances stood out for you?

The overwhelming stand out rookie for nearly everyone was Jack Hawksworth even if being caught out by the controversial restart. Katelyn said he was ‘great on and off track’. George did not expect him to be so strong. Martin added, ‘Really fast. Not afraid to pass (3 wide was brave) and totally unlucky with his crash’

There was a honourable mention to for Mikeal Aleshin, Alonso commenting on his lack of experience with the car and track time. As for Munoz, George added, ‘surprised by the performance of Munoz. I see great potential in Munoz but he is young and his strength has often come on the ovals, so it was good to see strong pace on a street course from him.’ Grieg thought it was ‘a solid, quiet drive, keeping his head down to finish 12th’. A couple, (Alonso and Niko) commented on Huertas, being where they expected him to be given the car, experience and time to prepare, which was minimal’. Something Carlos said himself after the race, "“Finishing the race was the main goal and I did that." 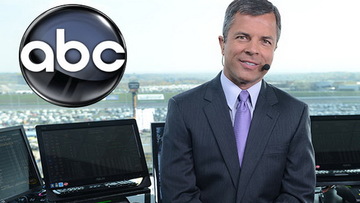 Bestwick joined the ABC Booth in St Pete (Photo: arnrace.com)
What did you make of the new commentary teams, both on TV & Radio?

The addition of Allen Bestwick to the ABC commentary team seemed to be well received, Katelyn commented that there was a ‘lot of talk about being new to the series which occasionally gave me the impression he had no idea what was happening, but that'll get better.’ George was happy with the addition of Bestwick but, ‘I don't find myself learning anything from Cheever and Goodyear; they have good credentials to be commentators but haven't driven for a while now. I think if Goodyear was replaced by a more recent driver, then more could be coaxed out of Cheever and the overall quality would be better. Niko thought that Bestwick brought ‘more audible excitement than pure interest, although the NBC team is still leaps and bounds ahead of ABC.’

Dan and Jennifer both commented on a marked improvement in the coverage overall, with Martin adding ‘I have watched the NASCAR Nationwide Series for a while now and I am a big fan of how ESPN covers that series. I really hope they can carry that through to Indycar

Karen is going to leave it few races to decide, but David still sees the the coverage as ‘not the same as about five years ago’

Alonso gave his thoughts on the IMS radio, ‘the crew is awesome. The return of Paul Page adds experience plus the insight that Pippa Mann gives is pretty good.’ 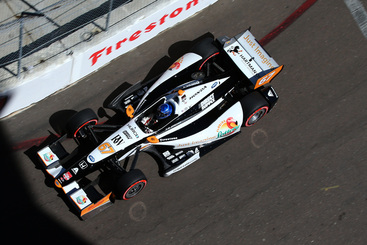 Drove a clean race, and picked up positions all race long, after starting in last place (22nd) finished in 9th place picking up 22 points.

“Today was a good day. A great points day. We started really buried in the field. Starting 22nd is not ideal and we had a really tough go on Saturday. That just put us on the back foot for the race. What we need to do is qualify better and have a better weekend as a whole. We kept fighting, there are a lot of fighters on this team who never give up. We scored a top-10 finish which is wonderful. It's good points, you have to be scoring top-10 finishes every weekend. I'm really pleased with that, it's a great way to start the year. It was nice having Florida Lottery on the car this weekend, they were really supportive, and everyone involved in our effort this weekend I think is pretty happy with our finish."
Race Rating - 3.5 Stars

All entries were asked to rate the race on a scale of 1 to 5 stars. Although not a bad race, still had its controversial moments with some brave overtakes, not as exciting as 2013.