Will Power lead home a Penske 1-2 ahead of Juan Pablo Montoya with Tony Kanaan rounding off the podium. It was a dominant race win for Power who stretches his lead over championship rival Helio Castroneves.

When is hitting your pit equipment and penalty and when is it a warning, did JPM get off lightly? 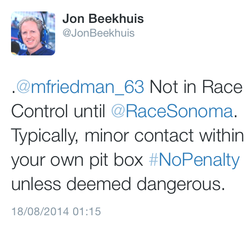 NBCSN's Jon Beekhuis gives his thoughts
AR - Yes, but i'm sure there is a logical reason behind their decision....

GOD - I thought it was an automatic penalty when hitting pit equipment. It seems like Indycar judged the consequence of the infraction (very little consequence to Montoya or the crew) rather than the infraction itself. Disappointing to see calls like this.

DB - In a word; absolutely! I've been critical of the inconsistency from Race Control all season & this is a prime example. Last race Josef Newgarden ran over an air hose & got a penalty, yet Montoya hits a tyre, which in my view is more dangerous, and gets nothing. For me it is (or was) the most black-and-white rule in the book; hit something, get a drive through.

TV - I have no idea what the regulations are on that, but for me it seems much worse to hit a tire than running over an air hose what Newgarden was penalised for at Mid-Ohio. And I really don't know what the point is in giving a warning. You hit something in the pits. You don't do that. Period.

RT - I think it will upset some drivers that he wasn't penalised. If you hit someone else's tyres you get a penalty. Surely its for reasons of safety.


TF - He got off seriously lightly and in some ways it kept the racing alive. The point is though Article 7.10.1.4 of Indycar's regulations. It should of been a black flag. It's a clear cut penalty and shows the inconsistency of race control in a bad light sadly.

On short ovals should Indycar assist with slower cars who don't get out of the way when being blue flagged? 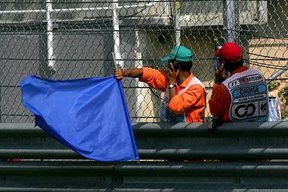 None shall pass...? (F1.com)
AR - I do believe cars have a right to battle to stay in contention, but if seen to be deliberately slowing down, blocking, they should be asked to move over. Especially if their actions benefit a team mate.

NG - If you're faster you should be able to pass but it's not always that simple, especially with tyre wear being a factor. I think if a leader is suddenly going x miles per hour slower than he was before, then that should trigger a blue flag, but it shouldn't be automatic.

GOD - No, Indycar should not be showing blue flags under any circumstance on an oval. A driver should always be allowed to fight to stay on the lead lap, even towards the end of the race. What if there had been a late caution and Hawsworth didn't have a chance to advance positions? Again disappointing to see the blue flag come out.

DB - Yes. Possibly even on more than short ovals, but it was at its worst yesterday. I get that Pagenaud has a beef with Power but he could've cost him the race when being a lap down, which isn't on. Likewise Montoya could've had a better shot at catching him had Race Control intervened.

TV - If the backmarker isn't running funny lines, definitely not. Watching the frontrunners fight their way through traffic is one of the most compelling things on a short oval.

JK - absolutely...dangerous situation on short ovals if a slower car cannot get out of the way of faster cars.

RT - Only if the car behind is clearly challenging. In sundays race it was clear that the blue flagged car was not impeding in any way and wouldve had to slow down to let them past thus creating a safety issue.

TF - The risk is that it ruins someone else's race but I think maybe a little more control, say two laps or three laps before the car has to give way. Gives them a chance to continue the battle that one is involved in without compromising the leaders too much.

Where do you see the future of the Milwaukee Mile on the Indycar Schedule? 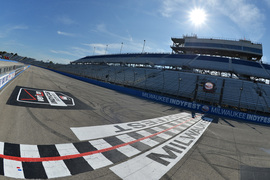 2016 and beyond? (C.Owens)
AR - I went in 2011, one of the few, and really felt the history of the track and it's importance to Indycar in the long term. I do fear that if it drops off the schedule, that will be the end of the track and will become housing.

NG - The event is obviously dear to IndyCar because it gets a very good deal on the sanctioning fee. As long as Andretti can afford his end of the bargain I think it'll stay. Wish it was after Indy though as it is a much better advert for the series than Detroit.

GOD - I would like to see it take the traditional slot on the weekend after the Indianapolis 500. I don't think there is any chance of this happening.

DB - It's a shame there's doubt over its future. I'm a big fan of short ovals & Milwaukee is up there with the best of them.

TV - Would be great to have the race back on the date after Indy. But if you can get Road America back on the schedule, try to place both races on dates so that they do not interfer too much.

JK - Milwaukee needs to stay on the schedule...the mid August date is a great one.
Great historic track that many of the drivers love.

TF - As it has a title sponsor, I can see it staying a bit longer, but only if the fans show the support in the event, I want it to continue for historic reasons.

Is this now a two horse race between Power & Castroneves? 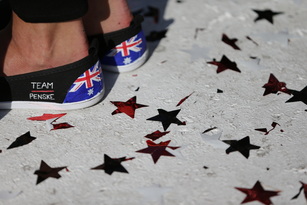 Penske on the front foot (S.Gritzmacher)
AR - With the spread of points available it is still open, but I wouldn't expect Power or Castroneves to had two bad races, it is between them, heart says Helio, head says Power.

NG - I would say so. Pagenaud can only win it now if he beats Power and Helio next week and if Will has another early exit from Fontana.

GOD - Yes, unless Pagenaud wins Sonoma and the Penske drivers don't finish. Double points at Fontana still means double points for finishing last and I think Pagenaud is just too many points back to be a serious contender.

DB - No, but only due to double points in Fontana. If it was a normal race the answer is more likely to be yes.

TV - It is. And if Power hasn't some really bad luck he will win it. Especially considering his dominance at Sonoma (3 wins out of the last 4 races) and how strong he is on ovals in the meantime.

JK - Going to be hard for anyone else to really catch Power and Helio with only two races to go.

RT - I think so, RHR and Pagenaud have dropped off the pace in recent races for various reasons. I think Power has finally got his head screwed on about finishing races with points and it should be between them.

TF - Yeah, well not mathematically but unless they Penske have a meltdown race in Sonoma, I can't see it as anything other than a two horse race. Gutted for Ryan Hunter-Reay and I'm not sure Pagenaud is a bit of a long shot.

Driver of the Day - WILL POWER (No. 12 Verizon Team Penske Chevrolet) 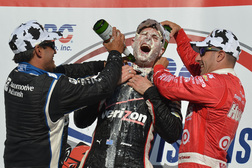 A dominant day for Oval fan Power (C.Owens)
A great day for Will Power, but with some honourable mentions to Josef Newgarden and Ryan Hunter-Reay who made great moves early in the race.

"The handling was awesome; we hardly made any adjustments over the whole race. Full credit to the team for giving me such a great car. These are my favorite tracks these days. I really enjoy the ovals - it's great fun. I hope we put a good show on for the fans. But, man, I just love races like that. Texas would have been the same (for us) but I got a penalty. It's just a great way to start these last few races. The team's done such a good job, everybody at Verizon Team Penske is doing such a great job, we're a well-oiled machine right now with all three cars.

(Does he like his chances in the championship) If we have a couple more days like this of course it's going to be a great finish. We're going to keep our head down, don't think of points, and execute."

AR - As dominant a day you could get, controlled the race and field from green to chequered flag

DB - Showed a lot of bottle in his fight with TK, commanded the race, made a brave call on strategy and won on an oval...again.

TV - Didn't put one foot wrong. Led almost from start to finish and didn't give TK a chance after the second restart although being on much older tyres.

A good race, dominated by Will power, some close action and late moves added to the day.