In one of his most dominant victories that saw him tie Rick Mears in the list of all time wins, Helio Castroneves recovered from the unlucky strategies that cost him a potential win the day before. Second was Will Power, backing up his win on Saturday with Charlie Kimball making a return to the podium with a solid race and battle late on with James Hinchcliffe. 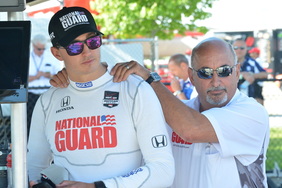 Rahal rub-down (C.Owens)
Back to back race weekends are a big feature of the IndyCar Series this season. But what are your thoughts on holding grueling double header street races straight after the Indy 500? Was there any hangover from Indy or did fatigue factor at all?

CA - I don't think there was any impact from Indy 500 they are tough guys and often drive with broken fingers hands etc lol nothing fazes an Indy driver!

AF - I personally do not like double header weekends. I think they are to tough for the drivers to complete 2 races in one weekend. Since they started doing these I thought that there should not be a race the week before or after. I think fatigue played a major part in both races. Just look at Graham Rahal. He was the first out of the 500 and gets 2nd in race 1.

NG - If there was, the drivers seemed to be coping with it. The next race is the real test because 372 miles on another super-speedway isn't going to be easy after the 800+ they've already done in the space of 8 days.

RB - If there was I don't think it showed on the drivers at the end of the day they are professionals racing in a very tough and demanding series and they will have moved on from Indy pretty quickly it's been and gone for another year.

LR -  From a fan's perspective... Great. Drivers/Team perspective? Could be double trouble. If all goes well, teams reap the benefits... Double points, momentum, etc. if it doesn't, not much time to recover.

JW - I think a two week break would be better, it feels like Indycar is in a rush to close out seasons very early in the year. the double header in Detroit is great though!

GC - I think a back to back straight after Indy is a great idea. It allows a major contrast between the 500 and a street race, and tests the drivers' mental and physical endurance. Only Hunter-Reay really suffered from a hangover, which given the media attention he would have had is a little understandable.

PG - There was no obvious fatigue from my sofa in Oxfordshire but I'm sure the team crews will be feeling it! I quite like the idea of double headers, but I think the season is way too compact. I'd rather see it stretched out a bit, ending in October for instance. Less back to back race weekends would achieve this.

KE - RHR looked worse for wear but the rest of the field seemed psyched to be back racing.

AR - I believe the Indycar drivers are as fit now as they ever have been so week to week not so much, but if there are incidents from race one I can see them having a knock on effect the day after, Im growing to like the double headers. 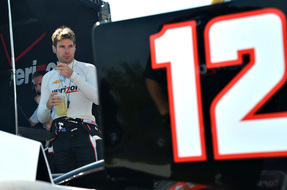 Power penalised for the first time in 2014 (C.Owens)
Not for the first time this season Will Power was involved in several on track incidents, this week receiving a drive through penalty. Is he just an aggressive, passionate race driver or a loose cannon that needs to be reigned in?

CA - I only have four or five lines to reply lol?! His mentality is that nothing is ever his mistake that makes him dangerous he's a good driver when he learns humility he will become a great driver.

NG - Power is an aggressive driver but I think he's been allowed to be this aggressive by race control being quite lenient on him over the years. A few more penalties when they're due should help curb the ambitious lunges.

RB - Will is a good driver I don't think anyone will say that he isn't, he's a championship contender every year for a reason. Driving wise he's a bit of madman behind the wheel has we've seen from his clashes with Pagenaud this season.

LR - Penalty was long over due. IndyCar needs to be consistent. Briscoe should have probably had a penalty yesterday as well

JW - His move early in the race for which he received a drive through was far too aggressive, he ruined 4 drivers races. The penalty was no where near severe enough. Black flag / race ban should have been considered

GC - I think Will is just purely an aggressive driver. He reminds me slightly of Schumacher and Senna in the way that he will push the limits and rules as far as he can. Sometimes he goes too far, but when it works (passing two cars around the outside into turn 4) it's amazing.

PG - He's exciting to watch for sure, and from an entertainment point of view there's something of the 'pantomime villain' about him, which I like. It's a tricky one as he's a star of the series and hugely talented. Do you risk dulling his appeal by trying to calm him down, or do you let him carry on as he is? There's a thin line between aggression / passion and being reckless, but I don't think I've seen anything approaching recklessness from Will Power yet.

KE - Hopefully the penalty will make him realise he isn't invincible. He is one of the most vocal when something goes against him yet makes up excuses every time he does something wrong.

AR - Sometimes the build of small incidents repeatedly this year have finally twigged something with race control. 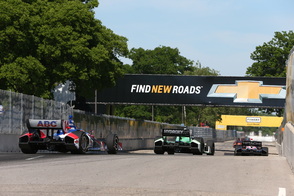 Maybe the sponsors have the answers? (C.Jones)
Roger Penske is committed to making major improvements to the Belle Isle track. What changes would you like to see or believe are necessary?

NG - Hopefully the track can be made a bit wider.

RB - I like the Belle Isle track as it is so no I don't think any changes are necessary if The Captain feels changes need to be made that's his choice.

JW - Clear Start/ Finish straight. with grandstands the TV's can see, run off areas instead of walls around high risk corners, widening of the course by 3-4 metres in most areas, and get rid of some (not all) of the huge bumps!

GC - Unfortunately with only two main overtaking places, Belle Isle is a generic road course. Aside from re-planning the circuit, I'm not sure what changes can be made.

AR - as Chevvy point out (↑)... new roads, maybe some resurfacing to help deal with the bumps and the cars can look a little ugly bunny hopping everywhere, but then again, watching Conway wheel it brilliantly during the middle stints was a sight to see. 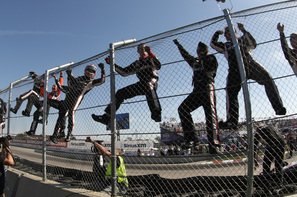 Spider-man climbs again! (J.Skinbinski)
Once Helio hit the front he never looked back, looked after his tyres well, pulled out leads time and time again even with yellow flags bringing him back into the chasing pack.

"We came out with the Hitachi car. Spot on. I mean yesterday it was a frustration, obviously. Great that (Team Penske) won but a frustration for our side because we knew what car we had and we demonstrated it today. I want to thank Hitachi obviously, Shell, Pennzoil. It was great. Also AAA, SKF, Verizon. Especially Chevy, man. This is the land of Chevy and we made it. Two! That was great. I'm so happy for Team Penske."

And the thoughts of our contributors...

CA - He came through and won and did it with grace and joy for the sport.

RB - Handled both late restarts very well to pull away from Will Power to take a deserved win and put losing out in the 500 behind him, he also had the best car all day and the pit strategy was spot on.

KE - He was so excited in his post race interview I'm amazed he could contain his excitement on the final restarts and stay ahead!

AR - Fantastic drive from the Brazilian, was on it all day and brought home a dominate win. Able to pull away and manage his tyres too. With his celebrations and passion shown post race, it is hard not to love the guy!

Another entertaining race from Detroit, and some fantastic drives from Castroneves, Conway and Dixon to name but a few, mixed in with some tyre management and a bit of controversy for good measure!