For the second time Englishman Mike Conway takes victory at the GP of Long Beach, after having early pace and technical difficulties in the weekend, drove his way past, and through incidents on track to take victory ahead of Will Power and Carlos Munoz. Conway benefiting from Scott Dixon who with only three laps had to pit for fuel after taking advantage of caution periods and stretching his fuel near to the chequered flag.

What was your take on the penalties given / not given during the race? 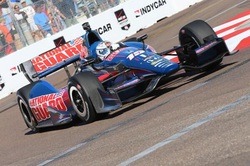 Questionable contacts?
A number of incidents during the race between Wilson / Rahal, Power / Pagenuad and Dixon / Wilson, which sparked debate on twitter as to why some incidents resulted in a drive through penalty and others didn't. Dan commented that he found it 'puzzling inconsistency again. Power on Pagenaud & Dixon on Wilson both lucky to avoid them in my opinion.' Callum thought the penalties were generally quite fair and understandable, George, 'From the TV I would have accessed Will Power a penalty, but I don't have access to all the data that Indycar had. I remember back to the last race at St Pete where so many people criticised Will for breaking at the restart, but later it was shown that Will did nothing wrong.'

Katelyn 'It was nice to see Barfield step back and let them race amongst themselves', Andrew, 'as long as its not a blatant dive bomb I'd never call it' and Chris, 'like the idea of drivers being able to race hard rather than jumping out of the way in great of a drive through..... Let's hope this approach continues'. All had a similar line of thought.

Niko highlighted the possible good fortune for Pagenaud, with 'Power being too ambitious, which ironically may have led to Pagenaud escaping the later pile-up at the front'.

Martin, Richard and Caroline were all of the opinion that Will Power should have faced some kind of punishment for his contact with Pagenuad that knocked the Frenchman out of contention for the win.

Owen and Katelyn both believed that Ryan Hunter-Reay should be assesed some kind of penatly for his actions that caused the pile up on lap 56, that took out six cars from the leading pack.

Are single file restarts really making a difference for the good given the issues in the past two races? 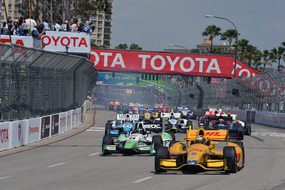 Indycars came two by two? (Photo: Chris Jones)
Split thoughts on the single file restarts, those in favour include Andrew, 'The tension of the double file re-starts is just as exciting as the standing starts', Martin, 'Last week saw it become the only talking point. This week we saw cars stuck at the hairpin waiting for the green and it just doesn't work. I said it before but double file is the best chance to overtake and create first corner excitement'

Owen, Katelyn and Richard all are in favour of keeping them, 'think they should keep them on streets as there’s too much damage especially towards the end of the race when everyone is impatient.' Caroline sees it just as an adjustment period for the drivers to get used to the new rules. As does Chris, 'Seemed to me there was more action on restart last year than this being two wide.... These guys are professionals so I say bring back double file restarts but possibly to early to give a fair review on this'.

Niko raises a good talking point, 'There doesn't seem to be any less carnage compared to previous years. We will only really see the benefit at Detroit and Toronto and I still question IndyCar's decision to have a blanket rule.' Which I feel is the real issue, treat each track on its own merits and adjust accordingly

Where the track is blocked, and clear up will take up a number of laps, should a red flag be called? 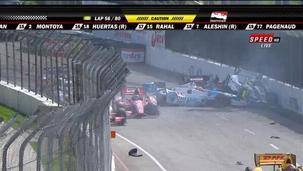 So very close in our poll, but as for the opinions on the matter, those in favour...

Dan, 'There were at least 6 cars stopped on track by my count, surely they know that's going to take a while, why not throw a red? My only guess is do they know how to restart (standing or rolling)?'

Chris, 'I would agree they should be used. Took the sting out of the NASCAR Nationwide decider last year by not using one near the end and took a chunk out of the remainder of the race at Long Beach just gone too.'

Andrew, 'I'd like to see the IndyCars sit in the pits for EVERY cleanup until the track is clear of all debris and safety workers. That reduces the chance of Track Services workers getting injured, it reduces the amount of wasted yellow flag laps and gives the fans more green flag laps for their money. also, quit counting yellow flag laps.'

Chris, 'Only if inside last 10 Laps on road / Street course or 15 on oval', with a similar thought raised by Richard, 'if within 10(oval) or 5(street/circuit) laps of the end then yes.'
Martin, 'It may be something to look at. We all want to see guys circulating the track but we want to see as many green flag laps as possible. This is one thing Nascar truly does well. If it looks like a lengthy caution then red flag and make sure the fans get green flag racing.'

Katelyn, 'We would get more laps of racing, but it wouldn't feel right stopping the race. The track wasn't blocked so they could continue circulating, and it led to the fuel intrigue with Dixon which provided some interest.'

Caroline, 'If drivers are injured and emergency crews are needed on track then red flag but otherwise no need really.' a similar opinion to that of Owen who said only for injuries.

Richard, 'We would get more laps of racing, but it wouldn't feel right stopping the race. The track wasn't blocked so they could continue circulating, and it led to the fuel intrigue with Dixon which provided some interest.'

George, 'No. Keeping the track under caution in my opinion is the fastest way of clearing the track.'

Niko, 'I am fine with having long yellows as it keeps the race going and throws a curveball in there with strategies.' 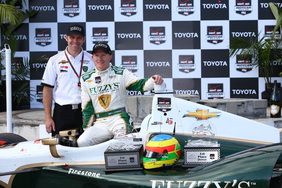 Carpenter & Conway (Photo: Chris Jones)
On a day where we saw some great drivers and overtaking from cars throughout the field, picking up the most votes was Mike Conway who started in 17th, picking his way through the field with a mixture of overtaking a good team strategy and work at the pit stops. Very honourable mentions to rookie Carlos Munoz and Juan Pablo Montoya who also drove fantastically well.

On his second Long Beach win, Mike Conway said "I can't believe it. I can't believe I'm actually here (in Victory Lane). Just an awesome job by the team. I can't believe it. Two times a Long Beach winner. It's unbelievable. It's good to be back here. My face is somewhere over there. Now there will be two of them." (How are you here after braking your front wing on Lap 1?): "You never know where you're going to be, so you just have to push as hard as you can all the time. I pushed because I knew Will (Power) was going to be close and he was good off the last corner. I knew I had to keep it clean there. I wasn't sure Scott (Dixon) was going to pull in there. I couldn't see he was saving fuel where he should have been saving. Second would have been good, but awesome. Awesome."

And some comments from our reviewers...

Dan - 'Hanging in there all race, avoiding the RHR incident & being patient behind Dixon.'

Callum - 'Won the race with minor damage, kept clean whilst many failed to do so, and had to fight his way through to get anywhere close.'

Chris - 'Calm, calculated and played the waiting game to perfection.'

Niko - 'Kept out of trouble and his last 10 laps were an example in measured but pressurising driving.'

All entries were asked to rate the race on a scale of 1 to 5 stars. Overall a very entertaining race, some great passing moves, controversy and a 'bonehead move'... or two!!