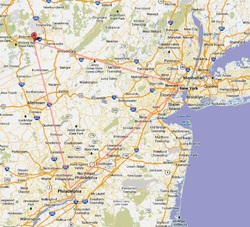 Pocono is set in the pastoral rolling hills of the eastern Pennsylvania, approximately 2 hours drive and triangulated nearly equidistant from the mega-metropolitan centers of New York City and Philadelphia.  For me however, this was a journey of 24 years and 9 hours...

Growing up and living in the mid-west of the US has been quite convenient when one is an Indycar fan. Of course Indianapolis Motor Speedway, despite being 135 miles away, would be considered my home Indycar track, but several prominent and historic Indycar ovals are only a partial day's drive away. Michigan, Milwaukee, Chicagoland, Kentucky, from 2 to 4.5 hours by car ride, and I've seen Indycars race at each of those. My list of places I've never seen Indycars race, however, is longer than of those I have. Of course the great and defunct tracks (such as Langhorne, Trenton, Ontario, and Nazareth) I will never see, but my list was gladly reduced by one this past weekend. 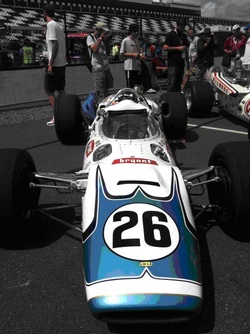 Rodger Ward's 1966 Lola on display.
It is difficult for me not add the word 'historic' before using the name Pocono Raceway because of its stature in Indycar's timeline. With design input from Indycar great Rodger Ward, a most unique triangular oval was built and first was host to Indycars in 1971. After many great and legendary races over the years, some intense bickering between ownership of the track and the then-current CART sanction regarding safety and track condition finally lead to Indycars not returning to historic Pocono in 1989. Now, 23 years beyond, in the fall of 2012, and after $Millions in renovations underway, Indycar CEO Randy Bernard and Pocono family ownership lead by Brandon Igdalsky struck a deal to put this fan-favorite track back on the schedule for 2013 and beyond, while also reviving the Triple Crown for Indycar.  Having never seen our beloved Indycars racing there in the prior 24 years at this great track, I knew the 9 hours drive to the track was still a "can't miss" opportunity.
The Track

Its deviously different 3 corners have confounded drivers and engineers since inception which is why it is a favorite of mine. Long before the 1.5 mile, high-banked and dreary cookie-cutter ovals featured prominently on the US racing landscape, track owners seemed to want to use their imaginations to create a unique racing experience for teams, drivers, and fans alike. Pocono is a great example of this. The region around the track property is hilly and wooded and somewhat remote from cities which lends a bit of serenity to an otherwise tempestuous locale. Its chosen setting also makes track access by car less than ideal, mass-transit non-existent, and most hotel inventories over 20 miles away but any fan worth their salt will gladly realize the extra hour either arriving earlier or waiting to enter the property is well-worth it when the green flag flies.  Having never seen any previous iterations, I found the permanent fan amenities modest, welcoming, and well-thought out.  The extra personnel from cheery ticket-takers to the bathroom attendants that keep the facilities tidy and well-stocked help to ensure the fan feels well-regarded by the track. The premium Paddock Club seating is the central (seen on TV as the black and white checkered color) of the Main (and only) Grandstand in which each ticketed seat is a plastic, molded chair seat and back which makes a multiple hour event more tolerable than the remaining aluminum bleachers. 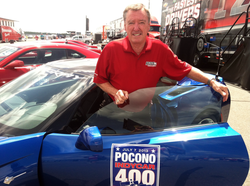 Never know who you could bump into
Making such a long trek, I wanted to be sure to give myself some time to experience the garages and fan village, so I purchased the $20 Saturday General Admission (required for track access) to catch practice, qualifying, vintage cars lap, and the Indy Lights race. I also opted to add the $20 Paddock Pass for the infield garage access Saturday only.  The Paddock Pass was well worth it for me to be able to chat with crew or drivers between practice sessions, grab a picture or an autograph, or just to see the garage happenings up-close. 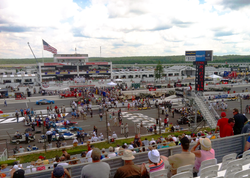 View from Sec NB Row 24
Sunday's raceday ticket placed us one section before the Start/Finish line approximately halfway up which is fairly close to my ideal location. I have found that my Indycar viewing is enhanced by being as close as possible to the track as opposed to the common thought for NASCAR fans to sit as high as possible.  I enjoy the increased sensation of Indycar speeds being lower and closer to the racing action. There are also the uppermost levels of enclosed or shaded sections in the long main grandstand which provide premium service and amenities for a premium price. All told my Saturday GA ticket ($20), Paddock Pass ($20), and Terrace Platinum level seat ($75) set me back a very reasonable $115 total for nearly unlimited access and a great vantage point for the race. Parking at the track is free, and the camping area fees also look to be fairly priced.

Fans can bring a modestly-sized cooler into the track stocked with food and beverages in non-glass bottles or cans provided it meets with the track's size restrictions. Generous since the food and drink for sale is priced at a premium typical of a sporting event.

Exiting following the race was a fairly typical 2-hour wait so we spent some of that time taking in the post-race awards and festivities, walking about the grandstand reviewing other vantage points, buying souvenirs (anything referencing this year's race was sold-out prior to the end of the race), an passing time with a futbol in the grassy lot. Once exiting traffic seemed to be freed up, we made our way to the interstate and back to our hotel in Stroudsburg for the evening.

For international fans traveling to the US for this race, I imagine several advantages in seeing the Pocono race: 1. the proximity to NYC or Philly for better prices on airplane service;   2. the relative bargain prices for lodging; 3. the historic nature of the oval. 4. The simple dedication to fans' enjoyment by the ownership. For those reasons and also including getting to see 'the fastest, most versatile drivers on the planet', Pocono is a good destination for International Indycar fans if Indy has already been crossed off their lists.
Summary

I can say without doubt that, of all the tracks that share both Indycar and NASCAR dates, I've never felt as welcomed as I was at Pocono Raceway. The amenities are good and I will easily consider this race again next year, most likely with more race fans in tow.