It’s hardly a surprise to hear of highly strung models having new noses in California, but when the noses in question belong to DW12 model Dallara IndyCars well then you know there’s been another incident packed Toyota Grand Prix of Long Beach.

I grew up watching Formula One and some of my earliest motor sport memories are of Gilles Villeneuve and co racing wheel to wheel during a golden age for the series. However over recent years my passion for F1 has waned somewhat as it’s become little more than high speed chess. That’s why as I sat watching the Bahrain GP on Sunday afternoon, my mind was already looking forward to what has become the main event for me – IndyCar.

The first two rounds of the 2013 IZOD Indycar series have provided some fantastic old school racing and proved to be the perfect antidote to F1. But after those action packed, exciting races at St Pete’s and Barber, Long Beach had a lot to live up too. Thankfully Indycar’s answer to Monaco didn't disappoint and the scenic, sun drenched South California streets held our attention from start to finish. 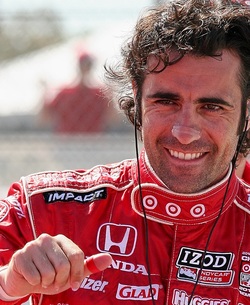 Pole Winner Dario Franchitti
Practice already saw many a driver testing out the tyre barriers while qualifying was littered with mistakes and penalties that led to one Ganassi car on the front row and one on the back. Four time series champion Dario Franchitti put the number 10 car on pole for his 250th start but his team mate Scott Dixon had his fast laps cancelled after causing a red flag. Others caught out by incidents and penalties were Marco Andretti, Simona De Silvestro and rookie Tristan Vautier whose Schmidt Peterson team made an unapproved engine change. Justin Wilson also missed out when, after rebuilding his car following a practice session crash, the team were penalised for not replacing the vinyl wrap on his rear wing mainplane, leaving him down in 24th. At the other end of the grid there were notable performances from Takuma Sato in 4th and the guesting Mike Conway, winner of the 2011 race, in 5th. The penalty count certainly created an interesting grid, with many fast cars out of position, which promised much for a Sunday afternoon of drivers charging through the field. 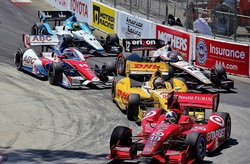 The Tightest of Turns at Long Beach
The race start, as with most of the subsequent restarts, was rather farcical and disorganised, a seemingly recurring theme and one that IndyCar really needs to sort out. Rather unexpectedly all cars made it safely through the first few turns, with the only contact coming from Conway giving Power a few new rear aero tweaks. Graham Rahal and Sebastien Bourdais both picked up places on the opening lap, but no sooner had we recovered from the shock of an incident free start than the yellows were flying. Sebastian Savaadra slamming his Dragon Racing chassis hard into the wall in a case of ambition over adherence. Scott Dixon on the other hand was a victim of plain old bad maths, as Vautier forgot that 2 into 1 won’t go. Dixon recovered to the pits, closely followed by Marco Andretti and Vautier, for the first cycle of many new nose cones we’d see throughout the afternoon. A few other cars lower down the order came in under caution for fuel and tyres deciding to roll the strategy dice, including Justin Wilson.

The Restart on lap 8 saw defending series champion Ryan Hunter-Reay briefly take the lead, but Franchitti braked later to sneak back under him into turn one. The Scot showing his determination to put his two DNF start to the season behind him and get his championship bid back on track.
The fabulous camera angle at the turn two fountain showed a little more contact with Helio Castroneves losing part of his front wing getting into the back of Conway, eventually coming in for a new one on lap 13. Franchitti started to pull a gap out in front, leading his first street/road course laps since Toronto last year. As the red walled option tyres started to fall away, both Hunter-Reay in 2nd and Will Power 4th came under pressure from the black prime tyre clad Sato & Hinchcliffe respectively. Franchitti seemed able to make his reds last better, but once Sato passed Hunter-Reay on lap 23 he began to close the 3 second gap rapidly.

Simon Pagenaud, Alex Tagliani and Mike Conway began the first round of scheduled pit stops, with AJ Allmendinger in for yet another new nose cone after hitting Hunter-Reay. Sato was first of the top runners to come in on lap 29, an excellent stop giving him the clear advantage, especially when a lap later Franchitti was dropped off the jacks with only three wheels on his wagon, losing valuable time to the former F1 driver. 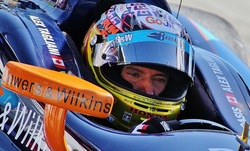 Alex Tagliani
As the leaders re-emerged, Tagliani and Charlie Kimball, coming off his first podium at Barber, decided to flex their muscles. The paint swapping continued through several corners before ending in the almost inevitable incident, Kimball overcooking on cold tyres leaving a rather disgruntled Tags with nowhere to go. The resulting full course caution allowed the pit stop sequences to filter through leaving the top five as Sato, Power, Franchitti, Conway and Rahal.

Another restart on lap 34 saw some of the expected first lap carnage, with St Pete’s winner James Hinchcliffe trying to squeeze his car into an ever disappearing gap, hitting Tony Kanaan and then his Andretti Autosports team mate, EJ Viso. Can’t see that being a fun team debrief… though even on watching the incident back, Hinch insisted he wasn’t to blame. May I casually suggest a visit to Specsavers for the Mayor?

Hunter-Reay was also involved in the restart carnage, hitting Pagenaud and landing on pit road for, you guessed it, another new nose cone. Is anyone keeping count so far? Viso recovered to the pits with suspension damage from the contact with Hinch, while Conway also limped to his pit box with electrical problems having gone backwards at the restart. Sadly the problems were terminal, prompting his team to apologise for letting him down as he’d been running strongly here again.

The second attempt at a restart on lap 39 saw Sato leading with Rahal getting under Franchitti for second. Series rookie Vautier somehow filtered through to 4th, up 24 places despite a penalty for his contact with Dixon. His team using pit strategy and cautions to their advantage and eventually passing Franchitti for 3rd on lap 42. Pagenaud made good use of the new red tyres to get up into 5th passing Kanaan running on the more durable blacks. Power, who’d never finished outside the top 10 here, dropped back at the restart, struggling down in 7th and not liking the handling of the car on either tyre. The series’ perpetual bridesmaid eventually getting passed by Servia on lap 44, who was flying despite a broken wing. 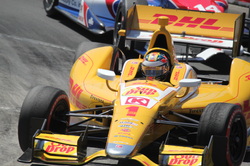 Series Champion: Ryan Hunter-Reay
Sato pulled out a good lead on his new reds initially, but Rahal hung in on the blacks and started to close in again as Taku’s tyres started to fall off the cliff. Pagenaud was once again first to start the final round of pit stops, in very early on lap 50 and with a lot to do to nurse his sticker red tyres home. Hunter-Reay, attempting to recover after his earlier contact tried pushing just a little too hard on his new, cold tyres while trying to pass Ana Beatriz, burying his car in the barrier. He admitted later that he was getting a little desperate, trying to make a bad day better but it just went from bad to worse instead.

The subsequent caution came a little early for ideal strategy, leaving teams having to manage both fuel and tyres, which rather compromised the racing towards the end sadly. Contact in the pits between Power & Vautier, as the latter’s crew released him into the arriving Penske, led to another new nose for Vautier and several makeshift body work adjustments to Power’s car, putting them both out of the points. Power’s guesting Penske team mate Allmendinger also dropped out during the caution completing a tough day for the Captain as the streets of Long Beach took their toll yet again.

The restart on lap 55 saw Kimball running out of position in second on the road, but only briefly as he went steaming into the first corner in full brain fade mode ending up in the tyre barrier. Following cars managed to clear him safely, but in taking avoiding action Franchitti lost out to Wilson who continued his impressive charge from the back. Kimball was able to get going without the need for a caution, returning to the track with a new sponsor’s banner hanging from his wing mirror and landing in the pits for what felt like the umpteenth new nose cone.

With the top four running long stint on reds, hoping to preserve them to the end, Kanaan in 5th on blacks equally hoped they’d come back to him as the softer tyres started to fall away. Apart from a few position changes lower down, due to the early stops, the race rather levelled off into a status quo over the next 10-15 laps as everyone tried to find the balance of conserving, pushing and defending. Kanaan’s hoped for fall off from the red tyres didn’t happen, as Sato and Rahal pulled away into their own little battle, with Wilson and Franchitti keeping the gap back to TK constant.

3rd Place finisher: Justin Wilson
Over the closing 10 laps, despite Rahal’s best efforts, Sato had an unhindered run to the flag. The only drama in the closing stages coming from Servia and Kanaan’s skirmish on lap 77, which left TK in the wall with a sore hand and temper. The full course caution came out as Sato completed his final lap, to finally bring home his first and it has to be said very well deserved victory in his 52nd start. Becoming the 5th driver to take his maiden win here after Michael Andretti, Tracy, Montoya and Conway. Rahal was thrilled with his second place, though beginning to wonder about a Long Beach jinx as it’s the 6th time a Rahal has finished runner up here. Wilson’s third place deserves special mention, coming through from 24th on the grid and Franchitti finally broke his jinx to score some much needed, solid points. With Kanaan and Servia’s incident, JR Hildebrand who had an uneventful yet effective race grabbed a no doubt nerve settling top 5 finish. Marco Andretti & Simona De Silvestro got solid top ten points too in spite of their penalties while Dixon made his way back up to 11th having been a lap down.

But the day undoubtedly belonged to Takuma Sato; the Banzai crash demon finally strung together those flashes of brilliance into one perfect race. The beam on his face as he stood on the top step of the podium, proudly draped in a Japanese flag said it all…though I suspect many people were too busy laughing at the fact he was still shorter than Rahal and Wilson to notice.

And so the IndyCar circus leaves Long Beach with a lot more carbon fibre, a lot less greenery on the fountain and a lifetime of great memories. Next up is Sao Paulo, the final regular race before Indy500 fever reaches epidemic levels. Buckle up folks, because on current form it’s gonna be one hell of a ride! 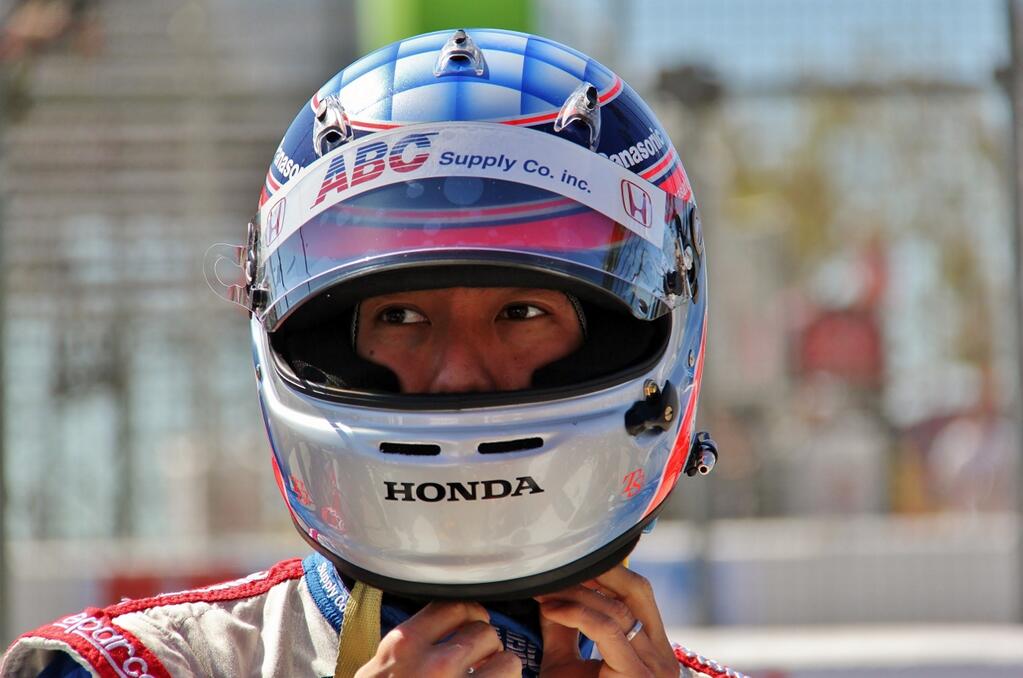 Race Winner: Takuma Sato
All in all another great race, full of incident, though after Sato the big winner was undoubtedly the Dallara factory with all the nose cones that were replaced. The big losers however were the TV viewers with 15 ad breaks, averaging 3 minutes each time. I almost know more about dish washing powder and erectile dysfunction than I do about this race. ITV F1 was bad enough but this takes the biscuit – we miss you Keith Huewen!