In a delayed race from Saturday, Sebastien Bourdais controlled from the start to take home his first victory in open wheel since 2007 leading all laps barring 7 (of 65) during the pit cycle. Castroneves kept up his championship hunt with second place ahead of the season improving Tony Kanaan.

Bourdais win, start of the return to the front like in Champ Car or just a one off? 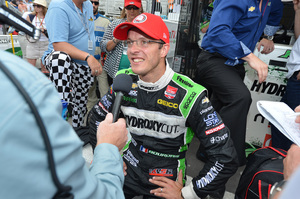 Bourdais back in Victory Lane (C.Owens)
MM - Well, I'm not able to look into the future but I think (and hope) that the ice is finally broken and the champ is back to victory lane more regularly.

CD - He's done well at Toronto recently, but I think this morning was just a one-off, a perfect storm of everything going well and going his way.

JM - For the past calendar year he's been pretty strong so I wasn't surprised to see him win again. I think he'll keep running well and scoring top tens, but I can't see him being as dominant as he was in Champ Car, not at KV racing. Hopefully Sébastien can regain some of performance - and luck - that made him so spectacular in Champ Car.

KE - Could become another Pagenaud. Capable of a few wins but probably not a championship contender - the team is too small.

RB - Bourdais has been a disappointment this season, hopefully the win builds some momentum for the last few races but I think it'll be a one-off success for the time being.

AR - I think this could lead to a bit better form, but in terms of becoming a championship contender again, not likely in his current situation.

Did you agree with the 'Racing incidents' which went unpunished by race control? Namely the incidents at turn three. 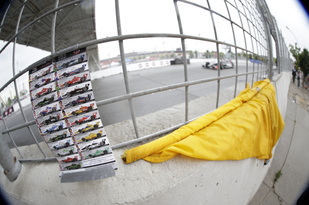 Yellows at the ready(S.Gritzmacher)
MM - In my opinion, not every single incident should be punished. That just destroys the whole racing and drivers are possibly getting too afraid to attack and go for it (Just take a look at the current F1 situation and you'll know what I mean).

CD - The only incident which should have merited a penalty was the Pagenaud / Filippi incident at the initial start, but that's probably just due to the resultant mess it caused. Otherwise, everything was just a racing incident. Also, bizarre call to warn Bourdais for blocking on the initial start. I mean, it's the start of the race going into Turn 1, everyone's going to be jockeying for position like that.

JM - I think most of the calls were correct. Will Power seemed to hit some pit equipment, but there's debate of that should even be a penalty. There needs to be consistency, however, not just in the races themselves but across the entire season, that's what is lacking.

RB - I thought the no call in regards to the clash between TK and RHR was the right call but I think both drivers could have given each other a little bit more room.

AR - I thought all the calls were right, don't mind hard, but fair respectful racing, its a tight track, these things happen.

Your thoughts on having a double header so close to each other, does this remove the real push by drivers knowing they can't really take too much damage with another race in a few hours, also the delay due to the weather, could they have tried? 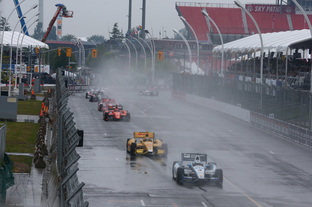 Attempt 1, 2, 3? (C.Jones)
MM - It's definitely more difficult for the drivers in both a physical and psychological way. Mistakes will - in the worst case - result in not being able to run the 2nd race, so everyone needs to be more focused. Cancelling race one was the right call IMO, racing in those conditions may be a spectacle for everyone watching but is far too dangerous for man and machine. Two races on the same day shouldn't become a regular thing though.

CD - I did feel that this first race did have the intensity knob turned down a bit, as a very bad incident for someone could have meant missing the second race entirely. There really was no way they were going to race on Saturday, with the newer wet compound Firestone developed acting more like an intermediate tyre; as well as IndyCar street tracks being a lot worse drainage-wise compared to F1 street tracks.

JM - I think it's fine. You generally, or at least I don't, always want to see drivers being reckless and taking too many risks. There was still plenty of hard racing and plenty to be happy about. As for the rain, I think if they ran the cars for 15-20 laps under safety car to clear some of the water away there might have been a chance to race on Saturday. At the same time, when there's two days you can race and it's potentially too dangerous to race on the first day, why not run two shorter races on the second day? Good call by IndyCar.

KE - What this weekend has shown is the ability of the mechanics to repair cars very quickly. The biggest weakness they need to consider is to not over-exert themselves.

RB - Hopefully racing twice on the Sunday doesn't lead to tiredness for all the drivers in race 2, it won't be easy for sure, if there'd been no rain delay on Saturday it probably wouldn't have been that much of problem in fixing broken parts but with 2 races in the same day the mechanics have to earn their money should a driver break something on his car in race 1.

AR - Having the two races so close together didn't really fit right, I feel too many of the drivers would be too cautious in case of damage to cars and getting them ready to race again in such a short space of time. I'd like to have seen them to try a few more exploratory laps trying to establish something of a dry line on the Saturday.
﻿Driver of the Day - SEBASTIEN BOURDAIS (No. 11 Hydroxycut KVSH Racing Chevrolet)﻿ 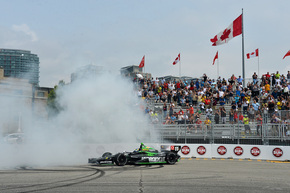 "It's really sweet, man. That one didn't come easy. We had to fight and wait for it for a long time, but today was just kind of one of these days when the stars align. I guess I was not expecting it because here I know how things can go. I was very relaxed before the race, just did the job and was hoping that things were going to pan out in our favor and they did and, couldn't be any happier with this one."

Thoughts from our contributors...

CD - Dominated the race, led everything outside of the pit cycles, and the best donuts so far this year!

JM - Back to his sublime best.

RB - Made the most of the pole position never looked back from the start, was never challenged for the 65 laps

A cautious race, but some great drives throughout and some adventurous overtakes, roll on the next few hours.... (brollies up)