Round 7 - Detroit, MI
"Pagenaud Crêpes on the Opposition" - Dave Render
Hello, and welcome to my review of round 7 of the Indycar season and  (race 2) of the Indycar duel in Detroit. First of all let me tell you a little bit about me. On Twitter I am known as @IndyCART, why IndyCART you ask? Well, since the Indycar split (don't get me started on that, I am writing a piece about it that you can read on Indycar UK soon), I have always watched Indycar/IRL and champcar/CART so I thought I would combine the two, hence how I came up with @IndyCART. I've been a fan of Indycar since 1993 when Nigel Mansell went over from Formula One and won the championship. Being a fan of Indycar and living in the UK has not been easy over the years, before Twitter I thought I was the only person in the UK who was an Indycar fan. No one in my family or any of my friends watched or even knew about Indycar, so on a Sunday night it was left to me to cheer on my heroes Paul Tracy, Alex  Zanardi, Greg Moore, Dario, and of course Dan! Twitter has let me talk and interact with so many great Indycar fans and now I have the chance to write a review for an Indycar race! Looking back over the years as a fan I never thought this would happen but I would like to thank @indycaruk for the opportunity and for everything he does for us Indycar UK fans.

Going into this race weekend JR Hildibrand has been released by Panther Racing and Ryan Briscoe replaces him. At the minute it's just a one race deal, so it is unclear who will be racing at Texas next weekend. Mike Conway makes a sensational return with Dale Coyne Racing, winning race one and starts on pole for race two. I hope and expect Mike to return for some other races during the rest of this season.

Now something that has bugged me for a couple of years is re-starts! To put it mildly they are shocking! Why can't every one line up two-by-two? The guy who throws the green flag needs to be sacked! 99% of the time the first three or four rows are ok, then the next few drivers are half asleep, strung out single file and it all looks a mess. I hope we see much better re-starts in this race, as the re-starts in race one were a joke!!

So, with Mike Conway on pole and James Jakes starting an excellent second it's an all English front row (we really do need a race in the UK). Power, Pagenaud, Briscoe, Marco, Rahal, Dario, Simona, Kanaan, Sato, Bourdais, Newgarden and Tagliani are all starting on the reds.

As the green flag waves Power, who started 3rd, passes Jakes for second, once again AJ Almendinger crashes on the opening lap and brings out the the first full course caution of the day.  He was later interviewed and blamed driver error.

Just as the yellow flag waves, Power controversially passes Conway for the lead, after a review of the pass, the officials rule the maneuver legal.  The race gets back underway and Conway immediately  takes over the lead from Will Power!  (once again re-starts, not good). Jakes who had started in second slipped down to sixth! But on lap 8 he passes EJ Viso and was back up to fifth. 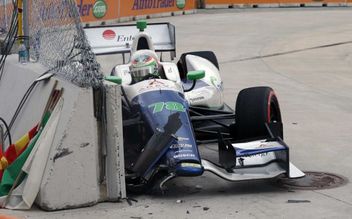 De Silvestro hitting the wall after her steering broke. Photo: CT Post
On lap 9 Simona crashes at turn 8 when in 24th place.

This brings out our second full course caution of the day, several drivers take advantage and make a pit-stop.

On lap 14 the race gets back underway with Conway, Power, Pagenaud as our top three. As the cars go into turn 4 Carpenter misjudges his breaking and goes in to the back of Tagliani, this brings out the 3rd full course caution of the day. Both drivers have to pit for new nose cones.

Lap 16 and the race gets back underway with some great passing right though the field. EJ Viso looses part of his front wing and has to make a pit-stop. The current series champion Ryan Hunter- Ray finds himself in third place at this point, but on lap 17 he makes an error, he hits the wall which damages his suspension and forces him to pit for lengthy repairs.

Lap 20 and our fourth full course caution of the day for debris, several drivers decide to pit, including Power from second but our race leader Conway stays out.

Lap 24 and we’re back underway with another shambolic re-start. Conway, Dixon, Kimball are the top three. Going into turn four Vautier gives Sato no room which results in the Japanese driver crashing head-on into the tyre barrier, unfortunately this means full course caution number five. At this point Conway and Dixon are the only drivers who haven't made a pit stop. 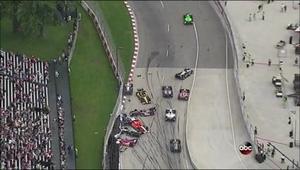 Restart mayhem Photo: ABC / ESPN
Re-start on lap 28 and the top 5 are Conway, Dixon, Dario, Kanaan and Vautier. Just as we get under-way chaos ensues going in to turn 1, Power gets punted from behind by Bourdais which causes a chain reaction though the field. Drivers involved were... Power, Wilson, Bourdais, Briscoe, Tagliani, Hinchcliffe, Carpenter, Helio and Rahal.


With the track blocked this brings out the 6th full course caution of the day. Dixon and Conway choose this as a good opportunity to make their pit-stops, Dixon subsequently beats Conway out of the pits.

After 10 laps under caution at lap 38 we were back underway. Our top 5 are Kannan, Vautier, Dario, Boudais and Kimball. Soon after the re-start Bourdais is given a drive through penalty for causing the incident with Power on lap 28. Mike Conway who is down in eighth place at the re-start drives an incredible lap, passing 5 cars finds himself in 3rd.

Lap 39, Christian Vautier passes Tony Kanaan for the lead, however, on the following lap Vautier pits and relinquishes the lead to Mike Conway who had subsequently passed Tony Kannan.

On lap 42 Kanaan pits, this lets Charlie Kimball in for second place, both Conway and Kimball are on sticker reds at this point. On lap 49 Conway appears to be struggling with his tyres and is  passed by Kimball for the lead, he then loses second place to Pagenaud before he takes to the pits.

Lap 49 Kimball pits which gives the lead to Pagenaud with Jakes second followed by Marco, Dario and Conway. Plenty of action going on throughout the field, there is no such thing as a boring uneventful Indycar race in 2013!

Lap 54 Mike Conway is 1 second per lap quicker in 4th than Dario in 3rd and at this stage in the race these two drivers don't have to pit again but the drivers ahead still do.

Lap 56 and our race leader Pagenaud comes in to pit, a great stop ensures he gets out ahead of both Dario and Conway. With 14 laps to go Conway passes Dario for 3rd, but race leader James Jakes still has to stop and he is 22 seconds ahead of second place Pagenaud.

13 laps to go and Jakes comes in, can he hold onto P1 after his pit-stop? Pagenaud passes leaving Jakes in second.

With 10 laps to go Pagenaud leads Jakes by 3 seconds, Conway is 4.4 seconds behind with Dario 4th and his Chip Ganassi teammate Scott Dixon 5th.

8 laps remaining and Dixon passes Dario for 4th. At the front James Jakes cuts Pagenaud’s lead to 2.2 seconds. Sebastian Bourdais, who has not had a good day, has an incident with Vautier but both are unscathed and carry on.

With 4 laps to go Pagenaud's lead is now over 4 seconds from Jakes, it is definitely his race to lose now.

3 laps remain and Mike Conway in 3rd is catching Jakes,  both have one push to pass left and there is less than a second between them. The white flag is out, one lap to go, can Conway get second from Jakes? But as the chequered flag waves Simon Pagenaud wins his first ever Indycar race for Sam Schmidt Racing,  James Jakes holds off Mike Conway for second, with Dixon fourth and Dario 5th. 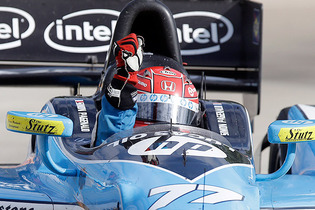 Pagenaud wins his first Indycar race Photo:ABC/ESPN
That was a thoroughly enjoyable Indycar race, I hope you enjoy reading my review! This is IndyCART signing off…ladies and gentlemen you may now turn off your engines!