Round 11 - Pocono, PA
'Monty Pylon Topper and the Holey Endfence'

The fastest 500 mile'r in Indycar history saw Juan Pablo Montoya take his first win in OWR in 14 years in a strong display all weekend taking pole with a new track record. Second was new joint championship leader Helio Castroneves with Carlos Munoz in third with another excellent performance on a big oval. A weekend to forget though for Jack Hawksworth who missed the race after crashing in practice which measured at 100G, Ryan Hunter-Reay whose post Indy blues continue and Will Power who was penalised again, this time for blocking.

Montoya wins in his return season  to Indycar, did you think he had this in him, especially from the start of the season? 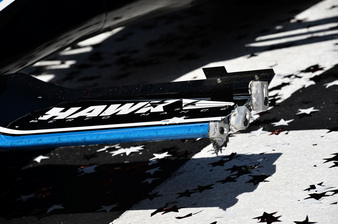 Even a damaged front wing couldn't hold JPM back (C.Owens)
JC - Didn't know what to think before first race. But he definitely proved his ability early on!

TF - No, I thought JPM would end the season mid field, but since the 500 he's really come to life in the Indycar Series, hope it continues, it's good for the series having a name as powerful as Montoya's competing for wins.

AR - As I predicted last November in Indycar MN's ATH  he would win, but what I didn't fully appreciate is that he would be looking at getting involved in the mix for the championship which given his recent run of results he is.

NG - I certainly thought Montoya could win an oval race. He's been doing enough of them for the past seven years! The big test now will be when/if a road/street course win comes.

JM - Of course! Was there anyone who thought JPM was there to make up the numbers? Or that he'd go back to IndyCar if he didn't think he'd be able to compete? I think a slow start to the season was inevitable what with not having driven an open-wheel car competitively since 2006; his McLaren team-mate Kimi Räikkönen had a slowish start after two years out of open-wheel racing and eventually finished 3rd in the F1 championship. What with IndyCar being a spec-series, where poor performances are harder to hide, I was always confident JMP would be competitive.

DB - Before the season I thought he'd fit right back in, but after the first few races it looked like he was going to struggle. The last few races he's found the pace & him winning again was inevitable.

AF - He figured that he would start out slow and gradually improve. I thought at the start of the year that he would win 2 races.

GOD - No I did not! I hope that we would see the Montoya of old, but I didn't expect to see him succeed when looking at how poor his results were in NASCAR given his incredible natural talent. Looking at the championship points and his current run of results, he has a genuine chance of winning the title which is quite remarkable.

Will Power still leads (by wins) the championship, but do you think he may blow his chances with his transgressions? 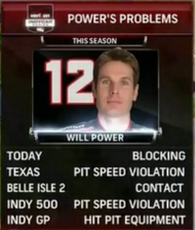 Powers rap sheet in 2014 (NBCSN)
JC - I think he is frustrated, but also aggressive. Half the time the drivers seriously don't realize they've done something wrong. This may put him in check. Or not! Hasn't cut back on the penalties yet.

TF - Power has blown a load of championships down the year for various things, I think this might be his year, but Helio will be right there and capitalising. I think it's now a two horse race between the Penske team err mates.

AR - Powers change in attitude to racing, going for wins and not worrying about points this year, maybe he is forgetting that you still need points to win a championship! Five times now he has suffered from penalties which have cost him some serious points. At the end of the year though, he will be there or there abouts...

NG - Power likes to say he's only thinking about wins and not the championship, but bonehead moves like that will cost him both.

JM - He's already blown two potential victories in races that pay double points, hasn't he? If Castroneves and Pagenaud can keep up the consistency they've displayed over the past two years, Power has drastically reduced his championship chances. If he calms down and stops making mistakes; he'll be champion. If he misses out; it's because of a few errors, not even rookies have been making.

DB - I don't think so, I tipped him before the season started and I still think he'll win it, but if he doesn't I think it will come down the penalties suffered in the last few races. It all depends on how he responds over the next few races.

AF - Will Power is one of my favorite drivers and I hope that this is finally his year. If he keeps getting these penalties he will not be able to win the championship.

GOD - I am a fan of Will Power so it really disappoints me to see some of his on track actions. Not only was his blocking against Castroneves totally blatant, but I also thought his driving after the green flag following the restart to be illegal. I can't believe I'm about to write this, but Power needs to listen to Montoya on how to drive maturely. There is no point in spending most of the race in the lead group if you are going to finish 10th in a double points race.

With all the green flag racing, the race was in part, eventually decided by strategy calls, What would you do - Pit early and hope for a caution, or be conservative and let the race run its course and stick with the strategy? 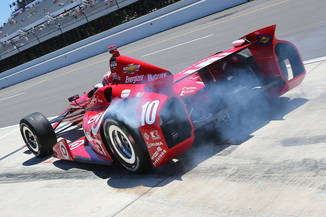 Kanaans strategy eventually cost him the win (C.Jones)
JC - The fuel strategy can be annoying because then you have a lot of drivers going slow and saving fuel. I think they should go fast the whole time and how ever it cycles out at the end is the finish.

TF - Depends where I am. At the back, Pit early and hope, you have less to lose, at the front, be as conservative as possible, manage the gap and let the race run its course. Midfield , flip a coin!

AR - Its a gamble and with gambling you should only bet what you are prepared to lose, in Kanaan's case he isn't in the championship fight so yes a brave move, but say Castroneves in that position, stay safe and get the points. Something that Montoya reiterated in his post race press conference.

NG - A caution is pretty much always going to come at an oval, so if it's in your mind to use one then it should be your plan from the outset and if you're going to be opportunistic, it needs to be a better bet than what turned out to be a big gamble from Ganassi. It worked for Newgarden because it was quicker than trying to pass all the cars ahead of him, which wasn't a slam dunk at Pocono.

JM - Were I a small team with a single driver and in a good race position but not fighting for a championship (SFH, for example); make the gamble. If it goes wrong, at the very least we led a few laps, maybe boosted our driver's confidence and maybe made our sponsors happy.
Were I a big team fighting for the championship? Too big a gamble, especially in a double points race.
Were I in CGRs position; gamble with the second driver, keep the leading driver out.

DB - While it wasn't conducive to great viewing, TK's strategy was so nearly on the money & he was fuel saving pretty early. Ovals have had several huge stints of green this season, so I think it's fair to assume that will be the case in future.

AF - I would be conservative and let the race run its course. Ganassi is desperate for a good result and if I was in there place I would have probably pit to and risk it. However Penske has had some great results this year so they had no need to risk anything.

GOD - I would have stayed out. I'm not against taking gambles, but you have to weigh up what the upside and downside risks are when you take a gamble. There were a lot of laps remaining when Kanaan and the others made their gamble pitstop and it was clear that they would have to stop again and lose a lot of positions if the gamble didn't turn out.
Who are the biggest #IndyRivals at the moment?
JC - Will Power and ...(fill in the blank)

AR - Will Power v The Field!

NG - Ultimately Power and Pagenaud because ofn what's gone on this year but with Helio neck-and-neck with Will and after the blocking move, Power could have a few rivalries on his hands by the time we get to Fontana!

JM - Graham Rahal and Lady Luck. In all seriousness, I think there's potential, on the ovals at least, for a great rivalry between Ed Carpenter and Will Power - Power still hasn't let Ed's remarks post-2012 season go and their "duel" of sorts at Texas was compelling. Elsewhere, I don't think we've seen the end of Bourdais and Castroneves.

DB - I think the dynamic in Penske will be interesting post-Pocono, if it's not diffused it could be explosive. I suspect the captain wouldn't let that happen on his watch though.

GOD - Power and the world. 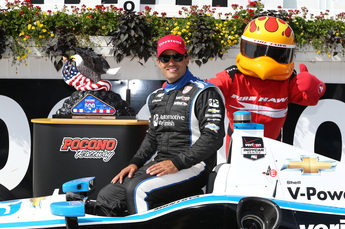 Back in Victory Circle (C.Jones)
Set a new track record on Saturday, won on Sunday whilst managing his fuel and still staying up front (average position of 2.10 throughout the race for the statisticians among you!). Honourable mention to Josef Newgarden coming a close second in the pole, ran up the leader board after starting at the back with a strong race and finish.

" First of all, I want to thank Verizon, IndyCar, PPG and everyone who supports this car and Team Penske. I want thank Roger for believing in me after how many years out of open-wheel, coming back and believing I could do it. Here we are. It's awesome that we could do it. I want to thank the fans for coming out... Verizon, IndyCar, PPG, Hawk Performance and everyone who believes in Team Penske and myself. It's huge. I was overly excited coming to the line, I can tell you that."

And the thoughts of our contributors

AR - His qualifying lap on Saturday set his stall for the race, always near the front and even with a broken wing for the last thirty plus laps managed to take the car home and his first win on his return

NG - Won even without an endplate!

By no means a classic race full of overtaking but still one to admire the skill and speed of the 21 drivers who took part in the fastest 500 mile race in Indycar history, which ran green for nearly 400 miles