Our latest interview in our series is with Jack Hawksworth,  a 21 year old British racing driver from Cullingworth, West Yorkshire. This year saw his debut racing Stateside in the Star Mazda Series, where he took a dominating eight race victories and with it the title, as well as setting new pole and fastest lap records along the way

So Jack, firstly,  congratulations on winning the title in your debut year in the Star Mazda Series, only the second British driver to do so. Which of the races this season stood out for you the most?

It's hard to pick one particular race as each victory was special but I guess I would have to go for Race 1 in Trois Rivierers. The car was perfect the weather was a great and we were able to go out and dominate the race on one of the trickiest circuits on the calendar! 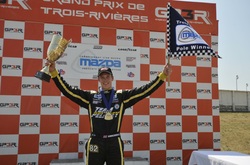 Celebrating victory at Trois Rivierers (1)
What about a favourite track? Or one you found the most challenging?

I really enjoyed Baltimore that was one hell of a street circuit but I am going to have to say Trois Rivierers again had the edge for me, that place was hell of a lot of fun to hustle a race car around.

The series has been praised this year for the range of talent on show, which driver pushed you on track the most this year?

I had some good battles with a few different drivers but over the course of the season, Chaves, Karam and De Phillipe were the ones who gave me the most to think about. 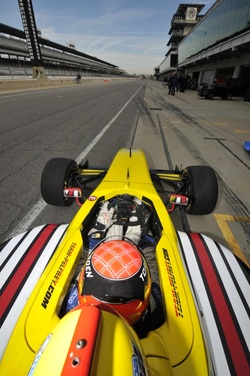 About to test at Indianapolis in 2011
You ended  up earning a drive with Team Pelfrey this season, as opposed to staying in Europe? How did this opportunity arise?

I was fortunate enough to get the opportunity to run at the end of season Mazda Road to Indy test with Team Pelfrey, things went well and we immediately set our sights on putting something together for the 2012 season. It worked out and the rest is history!

The Star Mazda Series is predominantly American driver based, and for the most part British drivers are held in high regard in American open wheel racing. What was the reception you received from teams, competitors and fans as a British driver?

I think the Star Mazda series this year had a great bunch of International and American drivers. I felt very welcomed into the series by everyone but at the same time everybody is out there to beat each other which is what it's all about!

You raced on two ovals (Lucas Oil Raceway & Iowa) this year. Was this your first experience of ovals? How did you find the challenge compared to the road courses you have competed on during your career?

Yes the ovals were a big learning curve for me but one I thought I adapted too pretty well. We struggled for pace at Indy but at Iowa we qualified 2nd and had a great car in the race but a freak failure caused me to crash in the race which put us out of contention for that one. There is a lot to learn but I look forward to improving and getting some strong results on the ovals next year.

Have you had the opportunity to talk with Indycar drivers / officials about your future within the series?

I haven't really looked too far past my next step really. People are always keen to give advice in the Indycar series which is a great help, but at the moment I am just fully focused on carrying out the best job possible where ever I am racing next season. 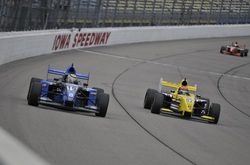 Challenging Gabriel Chaves at Iowa Speedway
In recent seasons we have seen a number of British drivers establish themselves in IZOD Indycar Series, has this helped you to settle into a life in America during your first full season away from the UK?

I don't really think that has helped me personally. I think drivers are judged on talent and attitude which is far more important than nationality or where you come from in my opinion.

What are your plans for 2013 after collecting a scholarship for winning the Star Mazda Championship?

We are currently assessing the best place for me to race in 2013. I have a great opportunity with the fantastic Mazda Road to Indy scholarship but nothing is decided yet. I expect to announce something before Christmas.

Looking  at the longer term future, do you see a return to Europe, maybe taking on the GP series with a view to F1 or staying in North America and climbing the ‘Mazda Road to Indy’ ladder?

At the moment I am very happy racing in the fantastic Mazda Road to Indy ladder and would love to be winning IZOD Indycar races one day, but for now I am just focused on putting myself in the best place to excel next season.

Who were your racing idols (current and/or past) whilst growing up and competing in karts? And who of the current crop of drivers do you most admire and aspire to?

Michael Schumacher was always my hero  growing up as his achievements were mind blowing! In Indycar Dario is the driver I admire most as he is statistically the best out there and when it really comes down to it, statistics don’t lie. 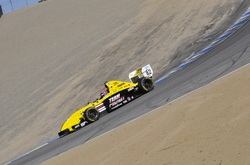 "Off the edge of a cliff" at Laguna Seca
Even more  so now fans and drivers can stay in touch / interact through social media such as Twitter and Facebook. Do you see yourself using these mediums to get your name ‘out there’?

Yeah I think social media is becoming a bigger part of sports and business in general and as racing driver you need to be able to interact with fans, promote your career and have following to make yourself more desirable to teams and companies alike.

And  finally, most of us will only ever get to use a Playstation or X-Box game, but how good is the famous ‘Corkscrew’ at Laguna Seca to take on?

The corkscrew is awesome, the first time  you go through it, it's like falling off a cliff! Once you get a few laps under your belt it becomes a little more familiar and even an exciting passing zone as we saw in the Star Mazda races there this year!

You can follow Jack on Twitter, Facebook, or visit his website. More recently Jack has been nominated as one of the six finalists BRDC Mclaren Autosport Award.  The ceremony takes place on Sunday 2nd December and we wish him well with that and for 2013 as his career moves forward with SPM in Indy Lights.