A race of two halves a slow burner of the fast variety, followed by a string of incidents, yellow flags and aggressive racing and overtaking at a hot and humid NRG Park in Houston. Simon Pagenuad won his second race of the year bringing him closer to championship leader Will Power, a great race for SPM saw Mikhail Aleshin take second and another rookie in Jack Hawksworth in third.

We've seen some top quality, experienced drivers making a number of 'rookie' mistakes this weekend, is this the track, pressure, conditions or other factors to consider?

Castroneves and Bourdais crash (J.Sibinski)
NG - A combination. I'm not sure I like double-headers being two standard races, I'd happily take two 75% distance events and it'd help with fatigue.

AR - The weather didn't help in race one, especially when the switch to dry tyres was made. As for the number of cars turning in on each other, a bumpy track to manage can't help but the car in front needs to be aware of those around them, neither Aleshin or Bourdais were looking to make a move (in my opinion).

TV - I think the main reason for that was mainly the field being squeezed together for most of the race along with the still very rough track surface. Considering this, the drivers did pretty well.

CD - Definitely a lot of factors, including the bumpiness and general roughness of the racetrack being a strain on the machinery; the intense heat and humidity; as well as it being the second of a doubleheader race weekend.

JW - Season is getting to a crucial points position and drivers get desperate going for too much and the wrong time.

AaR - I think it's much to do with the nature of the track....Houston is essentially a concrete canyon.....much like Monte Carlo where every mistake is magnified by the lack of run-off areas. The nature of IndyCar racing also has a lot to do with it as well, the side-by-side action leaves no real room for error. The only real bad mistake of the weekend was the Castroneves/Bourdais incident.....an incident where Castroneves was clearly at fault.

GOD - I think it's because the cars are very strong and risky manoeuvres are often rewarded. With some of the overtaking attempts, there seemed to be little consequence for most drivers sticking their nose in although sometimes the moves didn't go to plan.

Things aren't clicking for Ganassi this year, where is it going wrong and where can it go right? 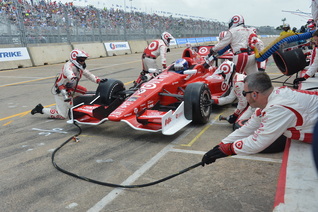 Dixon on Pit road just prior to retiring (C.Owens)
AF - I believe their problems began when they added a fourth car to their line up. They may not have the resources to run 4 competitive cars. I'm glad they added the fourth car and hopefully they will be able to keep the 4 cars for next year and be competitive.

NG - Well if we knew the answer then they certainly would too! They just don't seem to have any pace. Over a season you're always going to get misfortune and when you're slow it just makes it worse for you, especially if it comes on a good weekend for you.

AR - Three big changes since last year firstly no more Dario behind the wheel, the addition of a fourth car and a new engine partner in Chevrolet. With Dario, there has been a long continuity with the team, they know how each other work, it will take time. Adding drivers to your line up, no matter the quality can stretch resources, and finally the new engine, we know its a good engine, maybe just taking the team time to adapt to the changes, Andretti haven't been perfect either since the switch to Honda. On the whole, with Dixon, CGR have a top class driver, TK brings experience and wins, Briscoe too, Kimball a young upcoming driver who is looking more racy as he develops, it will come good I am sure

TV - Maybe they are missing the input from (the driver) Dario Franchitti. Can't really say. Additionally the drivers had some tough luck in many of the races. It can go right in Pocono. Thats where they turned their season around last year. But I wouldn't count on it either.

CD - If it's anything like last year, it'll all go right for them next week at Pocono. Ganassi 1-2-3-4 anyone?

JW - Dario was a big loss for them. Not only did he lead car development but he unlocked Dixon's full potential. They need a smoking gun to move them forward.

AaR - Briscoe and Kimball are ok drivers.....not bad but not really great either......Kanaan is old and Dixon has had little to no luck this year. It's important to keep in mind that it was at Pocono where they turned it around last year.....this weekend will be critical for Ganassi.

GOD - Difficult. It's not like their problem is that they are qualifying badly and that impacts their race result. Often they are in the fast 6 in qualifying but are anonymous in the race. I'm glad I don't work for the team and have to find the answer to this one.

What was your highlight of the race? 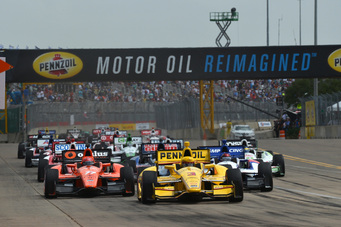 Close hard battles filled the later half of the race (C.Owens)
AF - Bourdais finishing fifth with the broken front wing.

NG - A lot of daredevil overtakes into Turns three and four!

AR - The battle between Hawksworth and Montoya with a little bit of Kimball added was great to watch, overtaking, taking risks, maybe sometimes a little close to the line but sums up Indycar in the recent seasons.

TV - Montoya being all over Jack Hawksworth and the young Brit staying cool.

JW - Hawksworth's battle to the podium - world class performance. Additionally he kept it clean and professional which is more than can be said for many others.

GOD - Generally the wheel to wheel actions was my highlight. Corner after corner a driver would try and pass on the outside and then lose position to a driver on the inside, yet one lap later they would get the position back. Honourable mention to Steve Matchett doing his Yorkshire impression in the commentary. 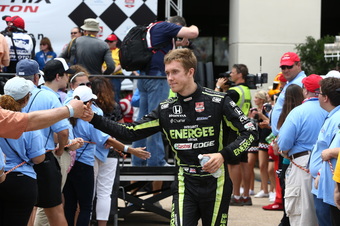 A rookie on the rise (C.Jones)
A first podium in Indycar for the young Englishman who fought off the challenges of vastly experienced drivers, kept his nose clean and brought home a well earned podium.

"Just a fantastic day really. We've been starting up front so many times this year and it's not happened on Race Day. Today, we had a terrible qualifying and we end up on the podium. The guys did a great job on pit wall. We were quick at the right time. We were able to pass cars at the right time and I'm so delighted and so proud of Bryan Herta Autosport. They really deserve this. It's been rough this year. We've been so fast on occasions and it's just not quite happened. We haven't been able to put it together and today we were able to do it."

And the thoughts of our contributors

AF - Started from the back and finished with a podium.

AR - His battle with Montoya and Kimball was a highlight of the race and summed up his determination to get the podium, good to have a little luck too this season!

JW - Jack has now showed he has every skill required. His race craft and car placement was simply breath taking. Very inspiring drive from a very talented young man.

AaR - Jack fended off a train of 10 cars on old black tires for 25 plus laps....and secured his first career podium, can't beat that.

The second half of the race was some of the best Indycar action you will see with lots of passing, battling and a fantastic drive by the winner, Simon Pagenaud.