A great call from Mike Conway to change onto slick tyres in changing conditions saw him jump ahead of the field and eventually speed off for his second win of the season, ahead of Tony Kanaan notching up a second podium of the weekend (well, day) followed by Will Power closing the gap at the top of the championship to Helio.

Red flagging a timed race? Yes or no...? 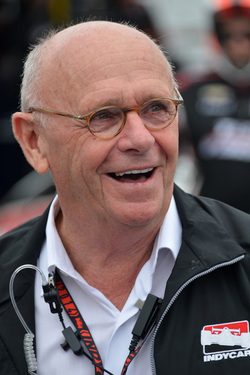 PC - I love that IndyCar is flexible enough to make sure the fans leave having seen a finish. However, they need to get some protocols pinned down so that it doesn't look quite so engineered. They seem to have a very loose leash at the moment and is in danger of looking like they make it up as they go along

RB - Yes, throwing the red flag and stopping the clock was the right choice, do you want the race to finish under yellow flags or under racing conditions? at the end of the day safety comes first doesn't it.

AR -  I thought the whole timed race was because there was a time limit to get the race completed, be it competition rules or the TV window cut off time? Hey-ho, I am glad Indycar does recognise that finishing under yellow is such an anti-climax when it comes to the entertainment side of the series.

TW - With all that had transpired over the weekend , I think giving the fans a green flag finish was a good idea.


JM - I think given the context; Saturday's race cancelled, two shortened races on Sunday, red flagging race 2 was, as it was with the Indy 500, a good shout. In this instance it gave the fans, both at the track and at home, the chance to see more on-track action; with Indy it was the first chance in years to see a green flag finish. I don't think, however, it should be thrown on a whim, else we risk going down the route of NASCAR and the green-white-chequered finish. The times they've used it this year have been sensible, I think.

Although rarely used, do Firestone need to invest a little more on wet tyres, or is it down to the track itself? 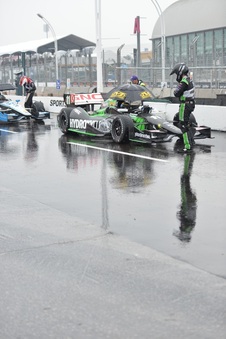 More tread please? (E.Anderson)
CD - They could do with a little more work on this new construction of wet tyre, but I still believe it is down to the track most of the time. These inter-style tyres handle rain at permanent road courses better than they do on the street courses.

PC - Street racing in the wet is always going to be tricky. The wet tyres are fit for purpose.

RB - Bit of both for me, yes Firestone need to invest a bit more in a decent wet weather tyre should it be safe to race in it but it also comes to the track that they're racing on remember Toronto is a temporary circuit compared to say Barber or Mid-Ohio which are permanent circuits come Monday Lakeshore Boulevard is back to being a major road in and out of Toronto.

AR - This seems to be a common theme when it rains, the 'wet' tyres just aren't efficient enough. I'd say Firestone need a little more investment and work on them, on the tread, just to help shift water, when they don't work properly we just end up with cars in the wall / tyres and lose far too much racing time.

TW - Design a weather tire that sheds the spray to the side rather than the rear of the car. Think of the application to congested freeway driving in a downpour and heavy truck application.


JM - A bit of both, I think; street circuits drain less than road circuits so wet weather on street circuits will always cause more issues than on road courses. At the same time, and I think Paul Tracy pointed this out, if Firestone had deeper grooves on their wet tyres there was every chance we could've seen racing on Saturday. It wouldn't do Firestone much harm to invest a little more though; bring your best to the highest level of motorsport you compete in.

Your thoughts on having a double header so close to each other, does this remove the real push by drivers knowing they can't really take too much damage with another race in a few hours, also the delay due to the weather, could they have tried? 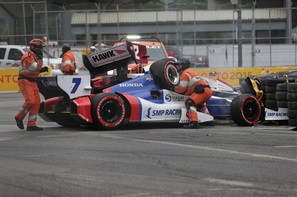 A lucky escape for Aleshin (S.Gritzmacher)
CD - Well, it's another race where a Russian has nuked a Colombian...

PC - I got a cold shudder when Aleshin submarined underneath Montoya's stranded car. Not good.

RB - The battle between Will Power and Helio Castroneves for the lead sticks out for me the other one isn't from on the track, but it was the amount of times Paul Tracy on the NBCSN coverage said Side horn in reference to Montoya's driving and the defending that some other drivers were doing.

AR - Seeing Power and Castroneves battle for the lead was great to see, even as team mates they are still going for it. when the track started to dry and the mix of wet / dry tyres on track was great to watch, it was always going to be one for the dry, just when was the intriguing factor, you just didn't know who was going to win.

TW - The skill these drivers have and their ability to adapt to conditions.

JM - The (successful) overtaking down at Turn 3-4; particularly Will Power on Helio Castroneves, with that little bit of contact too. That's the championship battle right there and could totally be the setting for another "#indyrivals".
﻿Driver of the Day - Mike Conway #20 Fuzzy's Ed Carpenter Racing﻿ 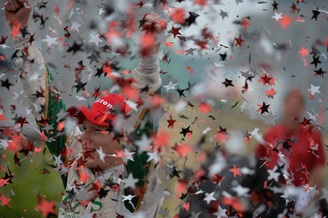 Starry Starry Mike (E.Anderson)
"It was really difficult conditions and we were kind of struggling out there for a bit and then I knew as soon as I could see the dry line I knew it was time to come in, and it was a great call. And the guys were up for it. I wasn't sure what they were going to say so from there we just kind of took off and just controlled the race. A bit nervous with the red flag there but I knew with Justin behind me, I knew we would be able to cover it. It was good fun out there." (About going onto slicks early) "It was really good. The tire temperatures came in really fast and that's what you need in those types of conditions so I could just control it and not have to push too hard and enjoy those last few laps."

Thoughts from our contributors...

AR - There were some stellar drives throughout, especially in tough conditions, but the quick thinking from Conway won him the race

JM - The whole race was a lottery, and he won. I don't think there's anything else that needs to be said. He also a made a great call on the strategy and a good move to take the lead. Ed Carpenter Racing might be team of the season so far.

The rain definitely added a mix to the field, the drivers were a little more at it for the second race of the day, now, have a day off everyone!!