Scott Dixon showed exactly why he is the current champion and considered amongst the best in Indycar with a brilliant drive from last to take his first win of the season. Sebastien Bourdais came home in second with another strong performance with James Hinchcliffe rounding out the top three

Another masterclass drive at Mid-Ohio by Scott Dixon, from last to first, finally puts Ganassi in victory lane for 2014. Why do you think it's taken so long & what makes Dixon so good at this track? 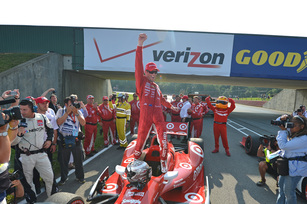 The new victory lane (C.Owens)
NG - I think it's just a case of the season being so competitive that it takes one team to get it right on one weekend and it gives them the edge. This weekend was Ganassi's turn, not the first time but finally with a bit of luck to make it happen too.

HS - It seems the change to Chevy and Kanaan took more time than the team originally thought. That was two major upheavals but a team like Ganassi should have been able to take that in their stride. They have been caught out on a couple of unlucky tactical calls but it had to eventually come. Form is temporary, class is permanent.

GOD - It's taken so long because generally the Target team haven't qualified well enough and just haven't been strong enough. I think it's fair to say that they didn't win this race by being strong, although once Dixon got into the lead he could show mighty strength with incredible speed and fuel consumption. I feel that it makes up for Iowa which they did deserve to win.

JM - I can't really say; something has been up with Ganassi all season. They didn't have the best of starts, though better than they did 2013, but as the season has gone on, they've been steadily improving and at Iowa, they had the best car. Perhaps the team are now focusing on being best when it matters: the last few races. Hell of a risk, but they obviously trust Dixon to achieve when he's at a disadvantage and, on the run to the championship, they give him the car to get the job done. I can't quite figure it out!

AF - I'm not sure if Ganassi can run a competitive 4 car team. 3 might be their number.

AR - The guy is a winner, it had to click some time with the new engine and Dixon did it in style, going fast, building and maintaining a lead, winning all without running out out of fuel.... JUST!

After the first corner incident between Tony Kanaan & Josef Newgarden the idea of a standing start on the pit straight was mentioned. What are your thoughts on the idea? 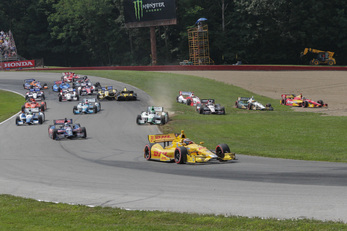 Rolling or Standing? (J.Sibirski)
NG - I don't think it's necessary. Newgarden turned in too late but TK didn't have a hope of overtaking by being there anyway.

HS - More of a knee jerk comment. Has there been a totally successful standing start this year. It's a narrow track first lap accidents are always going to happen.

GOD - As a European race fan, I feel like I see enough starting starts over here and would prefer Indycar to do more rolling starts. In my opinion rolling starts are more exciting. I don't think the start accident would have been avoided if there was a standing start.

JM - If there had been a standing start and there was a first corner incident, a different group of drivers, teams, commentators etc would've asked why there wasn't a rolling start, as usual. At Mid-Ohio, I think a standing start would be fabulous, and it'd be cool to try; but there's no pressing need to.

AF - I'm in the middle on the debate about standing starts. They work perfect at some places, like Long Beach, but I like rolling starts at St. Petersburg. I say have the drivers vote.

AR - Im happy with the rolling starts, these things happen in racing, in terms of an repercussions, its the first lap of the race. Unless it is dangerous or malicious, its a racing incident in my eyes.

After another promising qualifying & race performance, yet again Josef Newgarden & SFHR suffered a disappointing outcome. Is it just a matter of time & luck before that breakthrough win finally comes or does Josef need to think bigger picture? 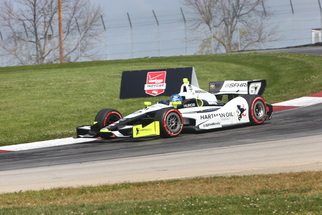 First sometime, soon? (C.Jones)
NG - Time and luck certainly! When even Dixon and Helio have been struggling for wins you know it's super tough out there to get one, especially for a smaller team.

HS - Winning is a habit. The team and driver are both still young and learning. Newgarden's first win is not far away but will it come with SFHR. He would have to be a serious contender if a slot comes up at Penske/ Andretti/ TCGR. and he'd be a fool not to go to any of those teams.

GOD - It's clearly very difficult to win an Indycar race and you need to execute everything perfectly to take the win. Based on Mid Ohio I'd say that it's a matter of time before Josef wins, but this is the only race he's looked like having a legitimate shot at winning in 3 years and opportunities to win don't come around that often.

JM - This time it didn't appear to be Josef's fault, and it very rarely is. Josef is doing everything right in the races, but qualifying is a bit of a problem for him still. The breakthrough win is close, very close, but it is vitally important he gets before the end of the season as to give some sense of momentum to his career (it is his third season after all and there's potentially a six month gap until the season kicks off again) and to give him a better chance at attracting a big team in the off season.

AF - As much as I want it to happen I don't think Joseph will be able to win with SFHR. If It does it won't be this year.

AR - It's probably just a little bit of luck and he will win his first, this season has been good for SFHR in race performance although their points standing does not reflect the bad luck they have had, ie mechanical and when used as another cars break!

Championship wise we had another race that had big implications for several title contenders. With all the twists & turns & the fact the top 13 are still mathematically in contention it looks like we're in for another tight final race championship battle. Who do you think has the strongest chance? 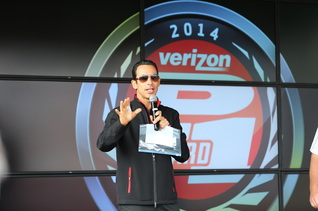 Helio's time? (C.Jones)
NG - I made Helio my favourite before the weekend and I'll stick to that. He had some misfortune but inly trails by a handful of points. If he puts it behind him, has a good next two races and then goes for it at the finale, I think he'll be hard to beat.

HS - You still have to fancy the Penske drivers, consistent finishing will win it from here.

GOD - Got to say that Will Power has the strongest chance.

JM - Will Power, if he doesn't screw it up or suffer any gremlins. Similarly with Helio Castroneves. The pressure already seems to be getting to RHR; I don't think JPM will do it this year but look out for him next season; but watch out for Simon Pagenaud and Scott Dixon, their consistency is metronomic and, providing they also don't suffer any gremlins, they are supremely poised to create a huge upset. That said, this is IndyCar so anything could happen and I don't think I'd be surprised.

AF - It will come down to Helio and Power. With Fontana being double points I think this will be Helio's year. This is coming from a Will Power fan.

AR - Its a Penske showdown between Power and Castroneves for me, gremlins aside they should both be up high, and Power has improved markedly on the big ovals. 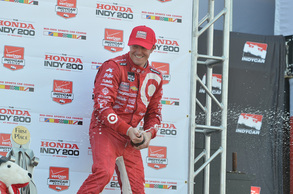 Back on top (C.Owens)
"It's a good feeling. Winning is a good feeling. I think having the year that we've had, you understand why the feeling is so good. Sometimes you can understand if one of us hasn't won at this point, but all four of us? I think you never want to get complacent in this series. It's extremely competitive. Everybody in the Verizon IndyCar Series does a fantastic job. That's why it's so tough to win. For me to get back on the top spot, it means a lot. I knew we had a good car. But at a road course like this, a very tight one, to be able to pass 21 other cars, unless you have strategy go in your favor, it's pretty much impossible. "It's kind of like when you win Indy for the first time. It's a small bit of that with relief and knowing that we didn't go a year without winning a race and that we can definitely try and close out this championship as strong as possible."

NG - That final stint was incredible. For once I didn't mind that the winner benefited from a yellow to make his fuel strategy to work, because it was clear Dixon was the one making it work.

HS - Can't argue with a last to first win!

JM - It should've been Josef Newgarden...but 22nd to 1st is not to be ignored. Took some luck, of course, but an excellent strategic call and fabulous fuel-saving combined with a thoroughly dominant drive, it has to be Dixie.

CW - He knows how to win

AR - Last to first, managing his fuel, keeping his nose clean at the start, and a very honourable mention to Mike Hull for his part in the win.

Some stellar drives throughout the field, and some without the reward. Great mix of strategy, racing, overtaking on some very tight corners all added to an enjoyable race.