The second closest finish in the Indianapolis 500 history saw Ryan Hunter-Reay take is first win, and the first for an American since 2006, after an enthralling last seven lap battle with the Penske car of Helio Castroneves. Marco Andretti came home third after a strong race. 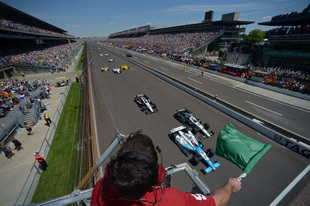 The field takes the green (W.Kuhn)
Owen Hamilton - I thought it was a great race with lots of action, I really thought that it would go green all the way. I am very glad that there seemed to be no serious injuries from the couple of large crashes that did take place. I thought Indycar did the right thing by throwing the red flag to allow the debris to be removed to allow green running all the way to the end. I would have liked Helio to get his 4th Indy 500 victory but congratulations to Ryan Hunter Reay.

Martin Chapman - This years Indy 500 was a slow burner compared to last year. Lots of green flag running and guys putting themselves in position to challenge. Some big accidents and a great call to bring a red flag and give the fans the thrilling finish which was an inspired call by the officials.

I want to talk about the 3 wide crash between Hitch, Carpenter and Bell. Carpenter made his anger clear after the crash and in his interview. It is worth pointing out Carpenter took to twitter post race to defuse the situation and state it was up to us to make our mind up about blame and stating he did not want a war of words. Looking at it a few times it was a racing incident but maybe all three need to take the blame. Was far too early to take too much of a chance like that and the second they went into the corner it was only going to end one way. A real shame as they were all contenders. Was good to see all three drivers walk away from the two crashes.

Greig Cardwell - An intriguing first 3/4 of the race, running solidly under green and becoming more of a chess game based on strategy and fuel consumption than flat-out racing. However, as is normal with American racing, "Yellows breed yellows". Once the first full course caution came out, a short spate followed which prevented the 500 reaching the intensity of the first 149 laps. The red flag killed the momentum that was building, but it was the right decision to set up what turned out to be an amazing final half-dozen laps. Hats off to Kurt Busch doing double-duty and finishing a highly commendable 6th in his first 500. 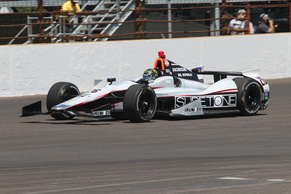 1100 miles to go, Double duty Kurt Busch (R.Dowdey)
Chris Daly - Bejaysis. Great racing throughout, particularly during the first 150 laps, and then the drivers turned up the wick after Kimball's caution.

The fans were treated to a great finish thanks to the red flag giving a chance, and the drivers keeping it clean for the final 6-lap run. Just a pity Helio couldn't make it four...

Rory Bevitt - What can you say about this years 500 that probably hasn't been already said and where do you start?

First of all the red flag was 100% the correct call in the end it gave us this great battle between Hunter-Reay and Helio for the last 6 laps that we wouldn't have had if we ended under a caution.
The Mayor of Hinchtown still can't get any luck this season can he? I initially put the blame on him for the crash with Ed Carpenter 3 into 1 wouldn't go and you knew it, but looking again on replays it wasn't his fault for the crash I put the blame with Townsend Bell, Ed was an innocent bystander and I felt really sorry for him he was having a great race up until then.
Overall the racing on the track was Firm and fair to go 149 laps without a yellow flag was unbelievable never did I think they'd get that far caution free, just shows how unpredictable the 500 can be.

Alonso Manso - A fantastic race. That long green flag run was awesome to see. Lots of fights for positions till the first caution then a few and the shoot out to the finish was awesome IndyCar racing at its best. 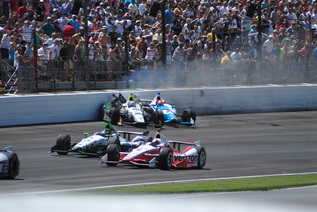 Hinch and Carpenter crash our at Turn 1 (M.Young)
﻿Tom Firth - A slow start in terms of action, led to a fantastic climax for the 98th running of the Indianapolis 500, with some old faces including JPM running well, mixed with the relatively rookie sensations of Sage karam and Carlos Munoz. Enjoyed the race , loved the end of it and think Indycar made an awesome decision on waving the red flag, for a restart, so we as fans got a green flag finish.

Chris Bourne - Watching the race with 4 first time 500 viewers I found the need to explain the following....these guys are doing an amazing job ruining under green without caution for so long, faster than any other racing series, closer than most other series and not wrecking at such speed when running such little downforce is simply amazing. To the casual, uneducated observer, the first 150 laps Could have looked a little processional but with the pre mentioned pointed out and with the promise of excitement building for the final 50 laps, I'm pleased to say the Indy 500 lived up to its claim of the greatest spectacle in racing.

The final 50 Laps were breath taking with position changes through the field and following the red flag (great call IndyCar) the final run for the milk was one of the best finishes I can remember with 1st and 2nd swapping so many times including an amazing pass by RHR into three almost on the grass providing the 2nd closest finish in history under the watchful eye of Andretti there to pick up the pieces should the top 2 tangle. ﻿ 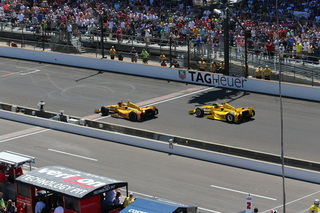 0.060 (B.Kelley)
Johanna Husband - For many people the Indy500 is all about tradition & history. The yard of bricks, the Pagoda, Carb Day the list goes on & on. But on Sunday it was a great mix of the old & new that created such an intriguing race. The inspired decision to throw the red flag after Bell's crash instead of the traditional trundle to the checkered under yellows provided us with a fitting & truly nail biting finale to what had been a slow burner of a race. The traditional yellows never came, with the race running clean & fast for an unprecedented 146 laps. And while our lead battle was between old favourites, as many of the traditional front runners fell away, pushed too hard or simply tripped over each other, the future stars came good. Last year's runner up Carlos Munoz & the very impressive Sage Karam securing top ten finishes & staking their claims to be our traditional front runners of the future. Tradition always rules at Indy though, with Ryan Hunter-Reay deservedly drinking the milk & becoming the next face on the iconic & historic Borg Warner Trophy. And I for one hope that's a tradition that will never end, no matter how tall the trophy gets!

Pat Wotton - It was nice to see so much green flag running, not so long ago we had a spell of a few years where every pit stop happened under yellow! Mind you, the way everyone was hanging back trying not to lead I did start hoping for a yellow just mix things up a bit.
Despite the flat out record pace for most of the event the attrition rate was very low, I'm not sure if that's because the current car/engine combo is bulletproof or if everyone was saving themselves for the last 25 laps.
The last half hour featured some of the best racing ever seen, not just for the lead either - and most of it was very clean!
I don't know what Hinch & Bell were trying with 3-wide that late into turn 1, it wasn't going to work.
And that battle after the final restart, magic. I thought Marco might take them both to end The Curse - RHR and Helio were just a little too strong. A worthy winner though, headline: 'Nice Guy Wins Big Race'.

Adrian Rees - Sometimes Indycar on Ovals have been embarrassing, and regarding the Indy 500, without an oval race before it on the schedule, it is concerning that the drivers haven't "Rehearsed" oval racing in 2014 before hitting the brickyard.

It wasn't a "Classic", it probably wont be remembered as such, even though it was the second closest finish in Indy500 History, but it wasn't boring, or one of the worst. It was a proper endurance race for almost 75%, then when the yellows inevitably arrived, they arrived with purpose, rather than an attempt to bunch up the field as it always happens in NASCAR when the crowd get bored.

A Red flag, to my mind, always meant the race was over before the distance would be completed, and a black flag meant the race would be suspended and then returned to action when issues were resolved, but I guess "This is America, we do things differently here". And it was clearly a good idea, races should never finish under yellows, and in turn they shouldn't have to resort to a NASCAR Green-White-Chequered Finish either.

RHR Has put the Long Beach overtake attempt to rest, by doing the exact same thing at a track which has the space and the car has the ability for the similar move to be pulled off. A deserved win, although I'd have liked to have seen the Pennzoil colours win at Indy, even if it wasn't Helio in the car. 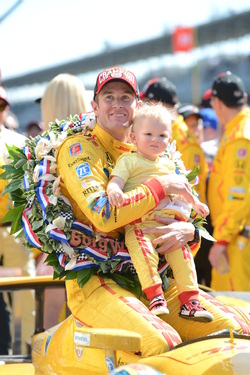 Indy 500 Champion Hunter-Reay (C.Owens)
In a close vote with Kurt Busch, RHR nicks it by one vote, the Andretti Autosport driver became the first American winner of the 500 since Sam Hornish Jr in 2006

"It's a dream come true man. I can't even believe it. I don't know. This is just the most fantastic team for what they've given me. My dream has come true today and I'm a proud American boy, that's for sure.

Q: tell us about passing and repassing Helio

"There was no practice for it. We never really ran those lines at all the whole month and that was all new. Everything everybody was doing at the end was all new. I didn't know if we had what it took but I've got the best team behind me. Nobody can stand on their own without a good team behind them."

"I knew we had a good race car. We didn't qualify well but we (did) bring it to the front. This is just a dream come true. I've watched this race since I was in diapers sitting on the floor in front of the TV. My son did it today. He watched me here. I'm thrilled. This is an American tradition, our auto industry is based on it..."

Q: What will you cherish most about winning the Indy 500

"Having my family here with me and being with this bunch. This is my fifth year in Andretti Auto Sport. I have such a great team. They were behind me every step of the way and you know what? It went green the whole way and I love that. Winning it under green like that with just a fantastic finish, we all raced each other clean but really hard. I think that was a fantastic race. I hope the fans loved it because I was on the edge of my seat that's for sure."

The second closest finish at the Indy 500 will live long in the memory, as will the 149 caution free laps that started the race! A real mix of fast driving, strategy, fuel saving, controversy, red flags and a heart pounding last seven laps...
Until next May... 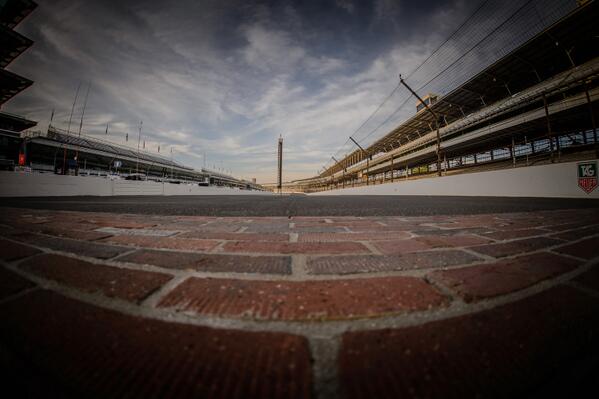