Ed Carpenter won his team's second race of 2014 with a strong performance on the 1.5 mile oval at Texas Motor Speedway. Despite a green flag penalty, late yellows, fresh tyres and fast driving allowed Will Power to sneak into second ahead of team mate Juan Pablo Montoya. 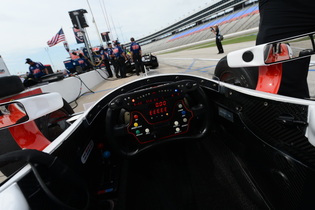 JPMs view (C.Jones)
Indycar changed the downforce options for the teams, giving them some leeway with their set up. Should the series open up more team options and if so, which areas?

DK - I don't think much needs to be changed. The series is good because the cars are so close and since nothing is wrong at the moment why change it?

JA - Perhaps allow them to change the downforce on other ovals, but not to get too aggressive so that drivers have trouble at each event.

TF - I'm still an advocate for the series opening up development of parts, though of little effect to us viewing unless it gets to the area that we get aero kits but by opening some development, it would save the teams cost and therefore maybe bring a few of those teams we lost back. 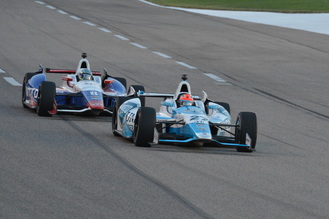 Aleshin thrived, Hinch struggled (C.Owens)
During the race I saw a number of tweets calling this a 'snoozefest' amongst others, what did you like from the race, what did you loath? Is clean / fast racing boring?

DK - Considering it's now 4am I was expecting to turn off after a while so I could get some sleep but I enjoyed the race. Good finish with 2 laps to go.

AR - I think maybe the only thing that was missing was a close battle for the lead, seemed like clean air was king. Sometimes it can be hard for the TV to show all the moves that were going on so you don't get the whole picture. If fast / clean racing isn't your thing, might want to try Nascar. Other than that the race was enjoyable.

JA - I always prefer fast clean racing at any course! Compared to last year, this event wasn't a snooze fest at all!

MC - By no means will it go into the books as a classic but it was interesting to see Carpenter hunt down Power. the biggest issue with the race was the lack of any real passing. Once they had gone a few laps into a green run they went single file and couldn't get through. Kanaan had one of the strongest cars of the day but couldn't get through at the front. I like clean racing without a doubt. Maybe it does make for a boring race however not every race will be a thriller so we move on and see what happens next time around.

CD - As much as I like that the race isn't the style of pack racing that we are used to from before 2012, the race still needs a bit more action. Clean fast racing with a modicum of strategy with regards to tyes and fuel is nice; but it is more suited for the road courses and the big ovals, rather than the high banks of Texas. Perhaps Texas still needs a bit more downforce, with a bit less tire falloff to allow for some close racing action for a few more laps after a start/restart, as well as ensuring that those who want to pass will need to spend a little more time side-by-side to make the pass happen.

AF - I thought it was a good race overall. I disagree that the race was a 'snoozefest'. The best parts of the race were at the start with Marco and at the end with Power changing tires. I enjoyed watching the long green flag runs.

TF - I thought it was a very good race, sure the battle upfront at times lost a bit but a race is more than just the front row, ultimately to me , it seemed like a really good night's viewing. 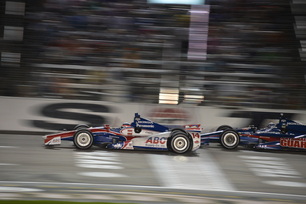 Sato was the last Honda to 'expire' (C.Owens)
Honda's seem to have a few issues in the race, is this a problem going forward with ovals, or high temperatures?

AR - As with the problems they had at Fontana when you were just watching the engines go pop. I think if this is an issue for them watch out at Houston and again, Fontana

JA - Could be a combination of both...These machines operate at extreme temps, Honda needs to figure out what went wrong...I give Chevrolet the advantage heading to the next oval...

MC - This may be a team issue. Andretti in particular never seemed to be on par with the top teams so they likely did something a little different engine wise and it clearly didn't work. Honda have shown they are a good engine and look back at the Indy 500 it shows they have the power to compete, this was just an off day.

CD - The Texas heat was definitely a factor, but probably as much or more so was the fact that most of the Honda engines were the same engines that had been in use for the Indy 500. Will be worth keeping an eye on any Honda driver who may have a very bad weekend at Houston, as they may not be able to mileage out their engine before Pocono, and potentially suffer a similar fate there, or be forced to take a points penalty to change it.

AF - Honda did have some major issues in the race with Andretti, Hunter-Reay, and Sato. Yet I don't think there will be any problems in the future. But I guess we will see in Houston.

TF - I wonder how close to the engine expiry those engines where that went bang, Pocono been a fast oval could be the test, I don't think Milwaukee or Iowa will be an issue, due to the different dynamic of those ovals. 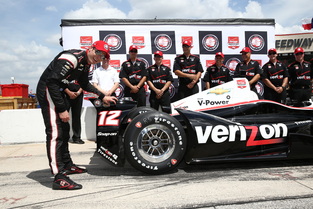 Power back to the front again (C.Jones)
What handicap do we need to issue Will Power with to stop him finishing second despite green flag drive through penalties?

JA - Haha! Just start Power from the rear of the field and see what happens...Even that might not be enough!

CD - He needs to be hit by a Mario Kart lightning bolt at every restart, so he's forced to be a teeny car driving super slowly around for the first lap after a pit stop or restart!

AF - Replace his car with a Camel.

TF - Indy lights car with a Lotus engine, if he still wins in that, I'm very impressed! 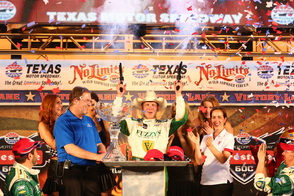 The oval specialist started well, hung in there and saw it home especially after Power's speeding violation to take win number three of his career.

"We had a good test here back a couple of weeks ago or a couple of months ago whenever it was. I just felt like we left some on the table in qualifying, but it made me extra motivated for tonight. The first two stints weren't great.  Had one bad stint, but the guys just made great adjustments all night. The Fuzzy's car was hooked up by the end. I think we were for sure the car to beat at the end. I was a little worried about that last yellow. I knew guys were going to come in. We talked about what we would do in that situation and we were kind of undecided. But Tim and the boys made the right call. Awesome night. I have loved this race track for a long time and had a lot of bad luck here. I have really always wanted to win here, so super excited."

...and the thoughts of our contributors...

DK - Deserved to win the race after the disappointment of the Indy 500. Drove a great race and was rewarded for it.

AF - Ran up front all race.

TF - Guy ran up front and finally claimed the victory the team has been so close to getting since pole day at Indy.

By no means a Texas or Indycar classic, but some fast clean driving and a popular winner after a enjoyable race.