After a long delay due to severe weather, Ryan Hunter-Reay secured back to back victories at Barber Motorsports Park with his first win of 2014. What started out as a very wet race, started to dry around a third of the way in and saw Hunter-Reay take advantage of a Will power slip and sailed off safely to his twelfth win, with Marco Andretti coming in second and Scott Dixon third (after four years of finishing second!).

What were your thoughts on the NBCSN coverage?

This wasn't so much brought up for the quality of the broadcast, which during the rain delay was well filled with driver interviews, features and a bonus of the second Indy Lights race, but more like the actual content of racing.

Me, Adrian,  personally have never felt so fed up of trying to watch a race just waiting for the ramp to start leading into the helicopter view and the inevitable commercial break. I haven't had the chance to count / time them but it felt like there was a break every 7-8 minutes.

Martin, 'The race ticker and on screen displays could certainly use a refresher to make them fully fit for purpose'.

Pat, 'Too many in-race recaps of the race so far and of warm-up and practices, which we'd already seen a lot in the rain delay. Far, far, far, too many commercials especially under green!'

Dan, 'They crammed them in during the yellows which usually means fewer adverts when under green but they proved to be just as frequent'.

Paul, 'Were they trying to cram a two hour ad allocation into the reduced 1'40?'

The issue of TV ratings always seem to be something of a hot topic on Twitter, how are you supposed to grow them without showing a good proportion of the race!

Was the switch to Dry tyres made too soon? 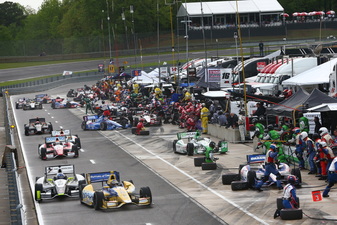 Red or Wet, also DCR or Penske, Helio? (C.Jones)
Only Pat really took the viewpoint that yes, it was too soon, 'just a few laps and could have avoided some yellow if they'd waited. Saavedra proved the wets still had a few laps left in them'.

Alonso was split on the issue, 'In these conditions you roll the dice. Sometimes it works, sometimes do not. for JPM was too soon? Maybe but from an impartial point of view, Juan tried to protect his line miscalculated the racing line and spun, so 50-50. As was Adrian, 'with hindsight and the number of spins, maybe a few extra laps of wet were needed but the yellow forced the teams hand with the tyres'.

Everyone else liked the risk of changing and taking advantage of the yellow to change.

Chris 'Always a challenge and someone always had to go 1st and be the hero.... Love to see the drivers really working and fighting for control'

Niko 'the teams got it right. The yellow forced their hands a bit but it was about time to think of changing tyres.'

Dan 'I think it was the right time. Saavedra was only slightly quicker on old wets and given the timing of the caution it made sense for the front runners to put dry tyres on.'

Paul 'it was about right, maybe they could've waited another couple of laps? Saavedra stayed out but his tyres were gone pretty soon after.'

Martin 'I think the switch was made at the right time but was always going to be tough as 99% of the track was ready but in parts there were rivers across the track, which were not going away. The switch may have been made a little early but as soon as the caution flew there was only going to be one decision from the drivers.'

What were your thoughts on the race in general, with delays, spins, driving standards, yellow flags, etc. 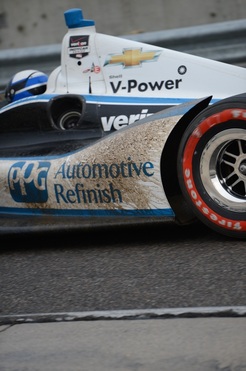 Pat 'Initially though the delay too long but once the race started Race Control were proven right to wait, still quite a it of standing water around. It looked about the right time to start it. Drivers just needed to be slightly more patient and let the race come to them.'


Alonso 'First time in a long time that most of us saw a race getting green in wet from lap 1. Driving standards were pretty decent. Lots of Drivers spun because the track was wet and some places had more water than other plus in a track like Barber is a bit difficult to see where is more wet.'


Chris 'Understand having watched US racing in favour of F1 for 20 years now but wonder if sometimes a local yellow to be thrown for a single car spin without contact to keep the momentum of the race flowing.... With a timed race, all the more important to maximise green flag running.'

Niko 'The constant yellows robbed the race of any real momentum.'

Dan 'I thought the driving standards in the wet part of the race were very good and some of the racing early on was brilliant to watch. Sadly it seemed that all that patience and common sense went out the window when the slicks went on and the second half of the race was really quite dull.'

Paul 'Good race generally, driving standards better than Long Beach, although Bourdais looked like he took Aleshin out. Shame Montoya spun as he was on a charge. Impressed by Hawksworth.'

Martin 'For a wet race I have to say I was surprised not to see more guys hitting each other. They have shown us again they are some of the best in the world and it was not easy to keep the car on track through different phases. However the race ending under caution was disappointing. When the race is set fr a lapped distance then I can understand but the timed distance they could surely have bought an extra 5 minutes to allow one or two green flags laps to the end and give the fans a exciting finish. But I do understand why Indycar doesn't use a NASCAR style Green/White/Checkered finish.' 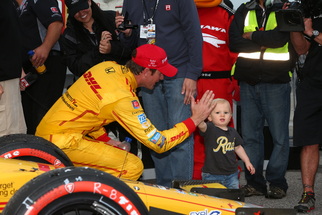 Ryan and Ryden celebrate victory at barber (C.Jones)
Winning the vote this week down to some very solid, sensible driving (no mention of Long Beach here) compared to some others who did get a nod but were perhaps a little too adventurous.

"I've been anxious (to compete) since we left Long Beach. What a dream to have a car like that at that distance. Great to get the No. 28 DHL car with a Honda at a Honda (sponsored) race into Victory Circle. (Long Beach) should have been a great result, but we got it today."

And some comments from our reviewers...

Dan - 'It has to be really, he kept out of trouble and had great pace throughout the race.'

Adrian - 'Was quick all weekend, made it safely past Power when he went off and kept it on the track where some others who impressed, didn't.'

Martin - 'I am not keen on giving driver of the day to the race winner but in this case RHR was utterly dominant. Even before Power slipped off he was catching him and once he hit the lead he never looked back.'

Although shortened in length, the race provided some drama, brave driving, strong passing, maybe could have rated higher had more of it been visible!